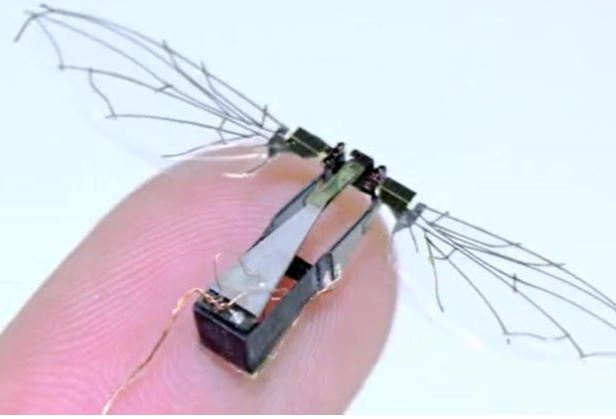 Military microdrones that can flap their wings and change their wingbeat mid-flight could soon be coming to a future battlespace.

Building off a patent signed in 2014 to create maneuverable wings for unmanned aircraft, the U.S. Air Force’s elite research lab is working with Airion Health LLC to prototype a mini air vehicle that can imitate either insect or bird flight and has the ability to change velocity without the support of a high-powered computer, according to a service release.

“Controllable forces would be generated by the wings based on position and velocity profiles, resulting in time-varying wing upstrokes and downstrokes, which, at times, maybe asymmetrical,” the release states.

The microdrone could be used for surveillance in the field or over military bases, or to stake out targets before personnel or other aircraft get to the battlefield. The latter mission has become a major focus for the Defense Department as it plans for a future conflict with a near-peer competitor.

Together with the Air Force Research Lab, Airion — a specialty company leveraging innovative and rapid prototyping solutions for both private industry and the U.S. military — will develop a workable “micro air vehicle,” or MAV, by early 2022, the release states. The service signed a non-exclusive patent license agreement, or PLA, with Airion for the licensing of the government-owned invention in January.

That doesn’t mean service officials will have the microdrone in hand at that time, said Joshua Laravie, the Technology Transfer Specialist and Domestic Alliance Program Manager for AFRL’s Aerospace Systems Directorate. “This milestone is meant to illustrate and prove that Airion is making progress toward meeting the revenue goals required later in the license,” he said in an email Thursday.

The company’s other products range from ventilation and respiratory systems to advanced moisture-wicking technologies for warfighters, according to its website.

The mini-drone will be remote-controlled, Air Force officials said, giving it the ability to change paths based on the user’s needs. According to the patent, the service is looking for a drone that has only two actuators, which enable mechanical movement, while offering six degrees of flight, meaning it can change position forward or backward, up or down, and left or right.

From a commercial standpoint, drones with such a range can maneuver into small, tight spaces such as tunnels or into larger machinery for inspection.

This effort was made possible by the Office of Research and Technology Applications at Wright-Patterson Air Force Base in Dayton, Ohio, which is also home to the research lab, the release states.

“We were excited to license our technology to a small business that was building strategic relationships in the drone industry,” Laravie said separately in the release. “[We] are looking forward to supporting their efforts to commercialize an Air Force technology.”

The research and technology office is overseeing the PLA since it is responsible for “developing collaborative interactions with industry, academia [and other agencies],” the service said.

While the size and weight of the MAV were not disclosed, it’s not the first time the Air Force has invested in small drones.

In February, the service posted a solicitation for handheld “throwable robots” that can scour a room or outdoor area and confirm whether there are people around.

Each device would weigh roughly one pound, light enough that troops could fling it into a room and then control it with a handheld device, according to the solicitation.

Called “Throwbot,” security forces airmen at the base can use the device to “see around corners while clearing a building,” which could be helpful in an active-shooter situation, according to a release.