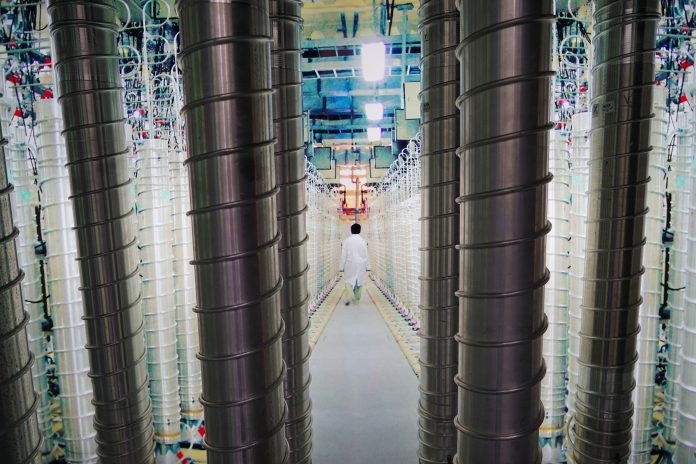 Although the nuclear talks in Vienna were renewed over a year ago, a return to the deal is not on the horizon, and the regime of the ayatollahs has increased the pace of its violations of the deal, which will make it even harder for the parties to reach understandings. The coming weeks will be critical, and at this point, the world powers, as well as Israel, must prepare for a reality where there is no agreement, accompanied by troubling Iranian progress on its nuclear program

The deadlock in the talks between Iran and the United States about a return to the nuclear agreement and the condemnation by the IAEA Board of Governors of Iran’s refusal to cooperate has escalated the tension between Iran and the international community. At the same time, Tehran is taking advantage of the crisis to increase its uranium enrichment to high levels, install advanced centrifuges that will step up its enrichment production, and remove some of the cameras supervising its activity. The coming weeks will be critical for the future of the Iranian nuclear program, and Washington and the European partners in the original nuclear agreement will have to make difficult decisions.

The ongoing tension about Iran’s nuclear program has increased in recent days. The Board of Governors of the International Atomic Energy Agency (IAEA) resolved on June 9, 2022, to demand that Iran cooperate and answer open questions. Iran responded by terminating the activity of 27 IAEA safeguards cameras (those stipulated by the nuclear agreement, and not those in the safeguards agreement under the Non-Proliferation Treaty (NPT). This Iranian measure is the culmination of a process that began over a year ago, in which Tehran decided to stop complying with the requirements of the IAEA Additional Protocol as part of its violations of the nuclear agreement (JCPOA), measures began after the Trump administration withdrew from the nuclear agreement. It is still unknown exactly from where the cameras, which were intended to provide highly significant information for supervision of the transfer of materials, and possibly also about high-level enrichment, were removed. In response, the IAEA director-general underscored that within a few weeks, he would be unable to provide a reliable picture of developments in the Iranian nuclear project.

The IAEA Board of Governors resolution was passed with the support of 30 countries, with Russia and China against and India, Libya, and Pakistan abstaining. Preceding the resolution were two reports concerning Iran published by the IAEA director general. One deals with the status of the nuclear program, and the other addresses the IAEA’s dialogue with Iran over the past four years about four undeclared Iranian sites; three of these sites were found to contain traces of processed uranium and other evidence of nuclear activity.

The report states explicitly, “Iran has not provided explanations that are technically credible,” and therefore concludes that the IAEA is unable to confirm the accuracy and completeness of the Iranian declarations, as relayed over the years under its commitment to its safeguards agreements with the IAEA. Iran’s conduct at sites that were not declared to the IAEA is a breach of its obligations under the NPT and the safeguards agreements and constitutes the basis for the Board of Governors’ resolution condemning Iran’s non-cooperation and demanding its immediate cooperation. While this resolution is purely declaratory, it could in the future serve as a basis for asserting that Iran is in a state of non-compliance, and for referring the issue to the UN Security Council.

In the second report, dealing with the status of the nuclear program, the most disturbing figure concerns the accumulation of 43 kilograms of uranium enriched to 60 percent (in addition to substantial quantities of uranium at lower enrichment levels). Some believe that this quantity is sufficient or very close to sufficient for high enrichment for a first nuclear device (note that this pertains only to fissile material, not a bomb itself). Among the threats issued by Tehran in recent days, possibilities of 90 percent enrichment were mentioned, with a hint of possible civilian explanations, and of withdrawal from the NPT. These threats were also made in the past, and the actions that Iran has actually taken so far have been restrained and cautious, while it examines the responses to its moves and weighs the potential costs.

Over the past year, alongside talks in Vienna aiming to return Washington and Tehran to the nuclear agreement, Iran has taken measured, albeit provocative, steps to further its nuclear program. These steps were taken under the umbrella of the diplomatic track and Western willingness to regard these steps as bargaining chips to improve negotiation positions. According to sources involved in the talks, the existing agreed draft document covers most of the issues, with an emphasis on the technologies, and in practice leaves two issues raised by Iran unaddressed – removal of the Revolutionary Guards from the US State Department list of foreign terrorist organizations (FTO) and some sort of guarantee that Washington will not withdraw again from the agreement. These issues, which have political significance for both sides, are now preventing a positive conclusion and a return to the nuclear agreement.

In effect, Iran’s decision to disconnect the cameras related to the nuclear agreement and to leave only what is required as a signatory of the NPT and the original verification agreement is a final abandonment of the nuclear agreement, following many small but significant acts in violation of the deal, but with no explicit declaration to this effect. This will not prevent Iran from returning to the talks at any particular moment, should it wish to do so, and attempting to promote arrangements for a return to the nuclear agreement – a measure that Washington and the European partners – Britain, France, and Germany – still desire, and which they are calling on Tehran to take. In effect, therefore, Iran is retaining its original bargaining chip, despite all its violations, some of which it will be able to reverse, should it decide to return to the agreement.

In the current circumstances, where the IAEA has no actual means of monitoring Iranian nuclear activities, the question hovering over the Vienna talks since they began should be addressed – whether Iran, and specifically Supreme Leader Ali Khamenei, is at all interested in returning to the agreement, or whether the prolonging of negotiations for over a year is designed to gain time, with no real intention of making concessions and rolling back Iran’s advanced nuclear program. It is clear that as time passes and the program advances, the chances and utility of a return to the agreement diminish, and the impression has grown that the Iranian regime sees no significant benefit in a return to the agreement. The harsh economic situation in Iran is still the regime’s Achilles’ heel – the rial-dollar exchange rate has reached a new high – more than 300,000 riyals to the dollar. Demonstrations against the economic situation are a regular occurrence, and debate in Iran about ways of improving the situation continues, including a return to the nuclear agreement in return for the removal of the sanctions. The regime, led by Supreme Leader Ali Khamenei, has so far adhered to the policy of “economic resistance,” given its basic lack of confidence in the US administration, especially the next administration; the realization that the economic benefits of any agreement are likely to be modest; and the wish to advance to the status of a clear nuclear threshold state. Underlying all these reasons is the assessment in Iran that the White House’s full attention is directed to the war in Ukraine: President Biden still wants to return to the agreement, there is no willingness to engage in military action against Iran, and Iran regards the damage that it suffers from various covert operations as tolerable.

Assuming that no bridging formula is found soon, Iran’s recent actions compel the United States and its European partners to formulate a policy for a scenario of no agreement and continued unsupervised progress in the Iranian nuclear program. The option in the nuclear agreement of a snapback, in which one of the partners to the agreement (not the United States, which has withdrawn from it) can apply to the UN Security Council and give notice that Iran is violating the agreement and that a renewal of Security Council sanctions (lifted in Resolution 2231, which adopted the nuclear agreement) is necessary, with no country having veto power over such a Security Council resolution, is resurfacing. This measure, which is primarily symbolic, will eliminate the possibility of a return to the nuclear agreement, and there is therefore reluctance to proceed with it at this stage. Meanwhile, monitoring the implementation of the existing sanctions can be strengthened and tightened, especially the oil exports that Iran has recently increased, taking advantage of the distress caused by the sanctions on Russia.

For its part, Israel must focus on reaching understandings with the United States and the European partners to the nuclear talks about future scenarios, with an emphasis on preparing a response to especially alarming progress in the nuclear program, an Iranian announcement on 90 percent uranium enrichment, or an ominous announcement of Iranian withdrawal from the NPT.