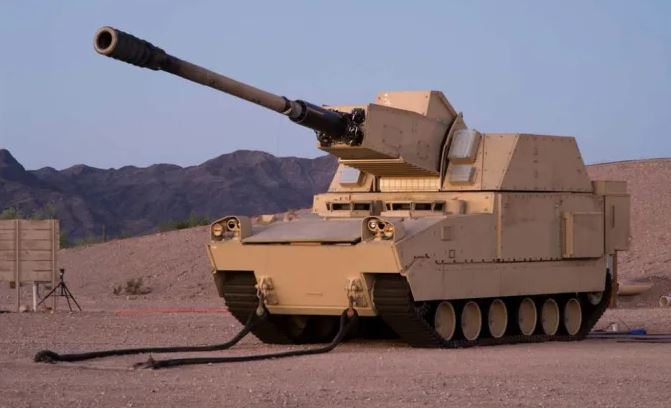 It was more than 15 years ago when the Army embarked upon a paradigm-shifting modernization effort then referred to as the Future Combat System, an elaborate series of weapons, armored vehicles, next-generation sensors, technologies, and a “system-of-systems” network approach intended to transmit critical real-time data across the force.

The concept of FCS, brought to life through demonstration and experiments for many years, was to enable a future force to meet and destroy fast-developing high-tech threats. The program evolved considerably over the course of many years, resulting in the construction of a new fleet of 27-ton Manned Ground Vehicles for armored warfare equipped with a “survivability onion” of layered sensors to track and intercept approaching enemy fire. This effort, included an entire series of eight vehicles to include a Non-Line-of-Sight Cannon, Mounted Combat System and medical and reconnaissance variants.

The vehicles were by design engineered to be lighter weight, faster, propelled by a hybrid electric drive and operate with a 360-degree sensor purview among other things. The development of the MGVs was based upon this “survivability onion” concept, meaning breakthrough command and control technology was designed to enable a series of integrated sensors and active protection systems capable of detecting and destroying threats before having to take a hit from enemy fire.

Much work was done, on the NLOS-C and MCS in particular, to enable a paradigm-changing measure of heavy firepower on a much smaller, 27-ton chassis. The NLOS-C was built for a high rate of 155m artillery fire, and the MCS was built and test-fired with a 120mm cannon to fire tank rounds. These platforms, as well as the concept of FCS, generated much success and optimism for future combat capability, however, the program was canceled in 2009 by former Defense Secretary Robert Gates.

In the years following this cancellation, many have come to the view that the FCS program, while brilliant and successful in many ways, was perhaps overly ambitious in its scope and not yet mature enough to continue. Gates raised concern about the survivability of the smaller 27-ton armored vehicles, as it was during the Iraq and Afghanistan wars which included massive IED and underbelly vehicle attacks. Also, some expressed concern that vehicles at that lighter weight, even if fortified by composite materials, might simply prove too vulnerable in the event that they had to take a hit. What if, for instance, the network malfunctioned or was successfully hacked? The vehicles might become more vulnerable than hoped for, as the thinking went.

However, one of the great ironies of the FCS program is that, despite its cancellation, it pioneered the conceptual framework and technological focus of what could now be described as major Army successes in the realm of breakthrough networking and sensor-to-shooter timeline improvement through experiments such as Project Convergence.

Beginning in 2020, this “campaign of learning” put in place by the Army, is succeeding in shortening sensor-to-shooter attack time from 20-minutes to 20-seconds, introducing breakthrough attack speeds now inspiring evolved Combined Arms Maneuver concepts. Project convergence is now arguably achieving the “system-of-systems” multi-domain high-speed networking envisioned with FCS decades ago. Ultimate, while deemed a failure in some respects over the years, the “ghost” of FCS could be considered inspirational, pioneering, and truly visionary.

There is yet additional evidence to suggest that the Army is now “achieving” breakthrough success with its long-standing vision, hope or ambition to truly “network” the force for high-speed, multi-domain attacks.

The service’s Project Convergence, a series of “learning” experiments in the desert that started in 2020, has been able to truncate sensor-to-shooter timelines in a long sought-after fashion. Using AI-enabled computers to quickly analyze otherwise disparate pools of sensor data in milliseconds to recommend an optimal “shooter” ahead or “inside of” the enemy’s decision cycle, Project Convergence was able to demonstrate massively accelerated warfare at the “speed of relevance.”

“I think that some of the things that we’ve demonstrated in Project Convergence have absolutely been breakthroughs, and the use of artificial intelligence to find targets and all this data, The Secretary and the Chief have have have talked recently a number of times about about data centricity going forward, and data is the new ammunition of the future,” Maj. Gen. John Rafferty, Director, Long Range Precision Fires Cross-Functional Team, Army Futures Command.

There is a fascinating and relevant history behind the Project Convergence breakthroughs, relating to years of previous Army innovation and work on modernization. Project Convergence arguably achieves the operational success hoped-for or envisioned years ago with an integrated software programmable radio program called Joint Tactical Radio Systems (JTRS). Tested and developed for many years, JTRS was developed as a multi-domain, secure, high-speed communications backbone for the Army’s canceled Future Combat Systems program.

The idea was to securely transmit IP packets of voice, video and data using NSA encrypted high-bandwidth waveforms. The many variants of JTRS, including vehicle-integrated Ground Mobile Radios, Handheld Manpack radios and even air variants, were intended to enable a multi-domain data-sharing network without needing to rely upon a fixed infrastructure. Each JTRS radio was not only a point of transmission but also a “router” itself able to support the expansive effort. At one point, HMS (handheld manpack system) small radios were attached to the wing of a Shadow drone to ensure line-of-sight connectivity between ground and air assets to enable information exchange in rigorous terrain.

Here is the question… do any of these concepts sound familiar? The hope, or ambition of JTRS, which never fully came to fruition, aligns clearly with the Army’s current breakthrough success with Project Convergence and emerging multi-domain joint warfare ability.