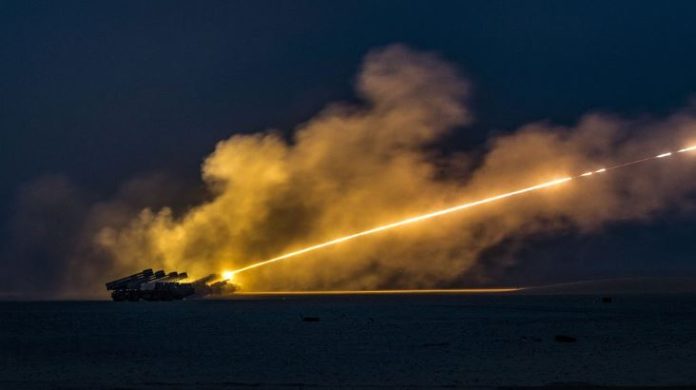 While the transfer of U.S. high mobility artillery rocket systems (HIMARS) and British multiple launch rocket systems (MLRS) will help Ukraine, we assess that the amount of systems and ammunition planned for transfer in the first tranche will only have a minor impact in the fighting.

Russia’s campaign in the Donbas region is reaching a standstill, with its numerical advantage in forces and fires effectively countered by Ukraine’s tactical employment of battlefield intelligence.

The race to resupply troops at the frontlines remains the linchpin for military success on both sides. As Russia sends more conscripts to support the Donbas campaign, Ukraine will focus on reinforcing logistical supplies and moving ground-based systems to the front lines.

The Kremlin’s Donbas campaign—which has focused on massing Russian troops and firepower around Severodonetsk in an attempt to capture the strategically vital city—appears to have slowed to a halt. Limited Ukrainian counterattacks have reclaimed small areas around the city and, as of publication, we assess that the risk of encirclement and destruction or capitulation of Ukrainian forces there has receded. Although Russia maintains a numerical superiority in forces and advanced weapons in the region, Ukrainian forces have mitigated that advantage by using battlefield intelligence—such as the sinking of the Russian cruiser Moskva and the Ukrainian ambush of the Russian battalion crossing the Siverskyi Donets River—to direct precision fires and stop Russian advances, stop reinforcements and resupply, and direct localized counterattacks. The Donbas campaign is nearing a bloody stalemate, with the line of control in the Donetsk and Luhansk oblasts staying essentially unchanged over the course of days and even weeks.

The Russian flow of forces and fires to the area around Severodonetsk aims to break the Ukrainian resistance, which would allow the Kremlin to encircle Ukrainian forces in the Severodonetsk salient. This leads us to believe that Russia’s objective is to annihilate the major Ukrainian fighting force in the Donbas, allowing Russia to take most, or all, of the Donetsk and Luhansk oblasts. For their part, Ukrainian forces will press forward with their precise application of fires to stall Russian momentum and prevent resupply of Russian front-line forces. Additionally, they will continue to execute limited counterattacks with the objective of extinguishing Russian resistance in order to retake large swaths of land and move the line of control much closer to the Russian border.

As has been the case since the start of the Donbas campaign, the race to resupply will be critical for both sides. To replace its losses, the Kremlin may need to resort to sending in thousands more conscripts. Meanwhile, Ukraine must maintain its logistics lines and move ground-based fires forward, including long-range artillery, MLRS, and unmanned aerial systems.

U.S. and allied support for Ukraine

U.S. delivery of rocket systems to Ukraine. On June 1, the U.S. Department of Defense (DoD) announced a new $700-million tranche of security assistance to Ukraine. The highlight of this package was the first pledge of U.S.-made multiple rocket launchers, for which the Ukrainian military and government has been clamoring since the start of the conflict—with added urgency as the Donbas campaign has progressed. DoD announced the deployment of four HIMARS launchers and associated ammunition, including the Guided Multiple Launch Rocket System (GMLRS), which is capable of hitting targets beyond forty miles.

NATO remains wary of risks of escalation. NATO is still trying to decide whether it will give Ukraine the weapons it needs to win the war decisively or to supply just enough to extend the war in hopes of a Russian withdrawal. Ukraine has extended this war longer than expected, and Russian President Vladimir Putin has warned the Alliance multiple times about the risks of escalation if itsupplies weapons to Ukraine. It is unclear what might provoke escalation by Russia–such as the threat of a tactical nuclear strike. If Russia begins to cede ground to Ukraine in large amounts, we assess that the risks of escalation increase dramatically.

If the battle in eastern Ukraine becomes a war of attrition, the Russians are currently favored to win. In addition to having a much larger population from which to draw replacement forces, Russia knows that Ukraine is dependent on older, Russian-made tanks and fighters. While Poland recently gave Ukraine 240 of its old T-72s, the donation of old equipment from former Warsaw Pact members is only a temporary solution. To help Ukraine expel Russian forces from its territory—and defend itself in the future—the United States must begin its full transition to U.S.-made equipment now. That means Washington should send M1 Abrams tanks, F-16 fighter jets, light armored vehicles, and helicopters. We believe this should be accompanied by renewed U.S. statements that it will not intervene militarily in the conflict, to assuage Russian fears.