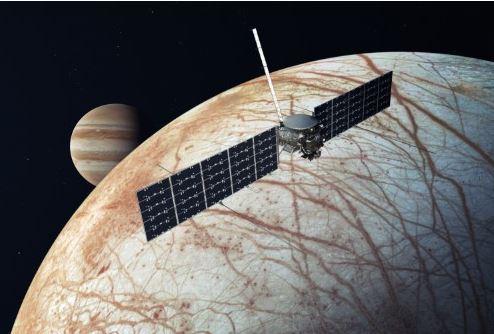 NASA’s journey to find alien life in our universe and beyond has made the organization develop its most huge spacecraft until now, named Clipper. It resembles the size of a Range rover and is practically a cylinder of aluminum.

It is supposed to have a height equivalent to a standard basketball hoop and will also feature solar panels that, if spread can shield an entire basketball court. It is surprising to acknowledge that one abundantly available material, aluminum has been used to make the spacecraft. Basically, due to the lightweight properties of aluminum, the metal is preferred in aviation and space industries.

The Clipper is supposed to leave for extra-terrestrial exploration in October 2024. The photos of the spacecraft’s finalized body were released by NASA on June 7, referring to it as a ‘massive milestone’ for the incredible mission.

The Clipper’s primary mission will be to investigate ‘Europa’, Jupiter’s moon, which might have traces of extra-terrestrial livelihood, as being vouched by the scientists.

The mission manager, Jordan Evans declared: “With this shipment, we are one step closer to unveiling the Europa Clipper science investigation.”

NASA has shared a time-lapse video of Clipper being shifted from its original birthplace at the Johns Hopkins Applied Physics Laboratory to the illuminated white rooms of the Jet Propulsion Laboratory at NASA.

Scientists have uncovered the existence of essential life materials such as carbon and hydrogen in ‘Europa’, which revolves around Jupiter and is approximately 90 percent bigger than our satellite, the moon. To travel the 1.8 billion miles or 2.9 billion km distance, Clipper is estimated to take six years and upon reaching its destination, the spacecraft will begin exploring the satellite for life.