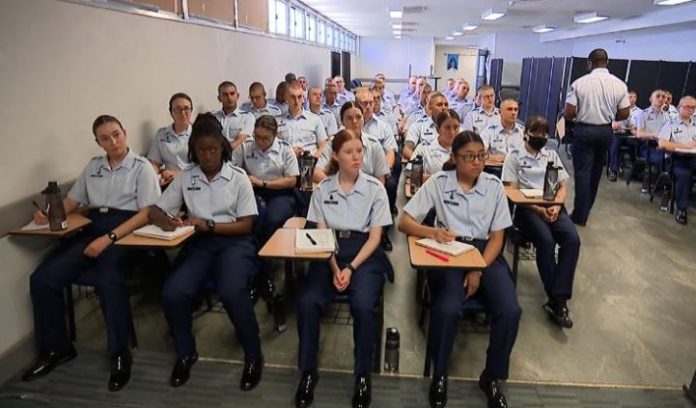 (CNN)The US Space Force has hit a critical milestone: dedicated basic training for its early recruits.

As dawn breaks on Day 38 of basic training at Joint Base San Antonio, a bugle playing reveille blasts over the loudspeakers as a sergeant can be heard screaming, “Are you prepared to join the world’s greatest space force? Then hurry up! Let’s go, let’s go.”

It looks — and sounds — like basic boot camp for soldiers, sailors, marines or airmen. But all 71 of the new recruits at this basic training are guardians, the name for members of the first new branch of the armed services in more than 70 years.

Until now, new guardians have trained alongside airmen in the Air Force’s basic military training program. What makes this boot camp unique is it’s the first ever guardian-only basic training, led entirely by Space Force instructors who are teaching a space-centric curriculum.

Master Sergeant Eric Mistrot, the Space Force’s first Military Training Instructor, is quick to point out that, “This is still the profession of arms. This is still the United States military. This is not space camp.”

Mistrot oversees all training for new guardians during the 7-and-a-half weeklong process.

“I come from an Air Force family. So when Space Force came around most people were like, what is that? That’s real?” 21-year-old guardian Syriah Harris told CNN.

The biggest change between this basic training and other boot camps is in the classroom, where guardians are taught a new Space Force-specific curriculum — everything from space history to space vocabulary.

“So if I say the word LEO — L, E, O — that stands for low Earth orbit, right?” Mistrot said. “You need to start thinking along these lines. That the world is bigger than what you see. That we go out to 22,500 miles into orbit.”

None of the guardians at this boot camp are training to go to space. Instead, they’ll be operating US military satellites from the ground or analyzing satellites from countries like China and Russia.

“You’re not dealing with tanks or ballistics or anything like that. You’re dealing with little blips on a, on a little computer screen,” said 22-year-old guardian Abubakar Siddique.

It’s a different type of warfighter — one that must strain their eyes and flex their mind more than their muscles — and it leads to the other big difference about this basic training: its core values.

“We want to build guardians here and what a guardian is, is about our core values: character, commitment, connection, and courage,” said Mistrot.

During a class on the Space Force’s core values, a sergeant asked a guardian, “What does courage mean to you?” The guardian replied, “I think courage means being able to ask for help when you need it.”

It’s a mindset made for a modern military force.

“Maybe you believe in a God, maybe you don’t. Maybe you need to step away and have some meditation time. Whatever it is, we want our guardians to be strong and healthy,” said Space Force Lieutenant Colonel Tara Shea. “From a diversity and inclusivity aspect, we want them to feel like you can express that in our service, you can express who you really are.”

“Coming here, I had a lot of people that were like, ‘You’re going to be the only Black girl there.’ But I even have two other teammates that look like me,” said Harris, who describes herself as the kind of space nerd who enjoys watching “live feeds of the moon rotating.”

It’s just the kind of space nerd the Space Force is looking for to protect and shape a new domain of warfare.

“We need our own Space Force basic training because we are our own branch now. We broke away, so we need to stop being in the shadows of the Air Force,” Harris said.

Harris and 70 other guardians are expected to graduate from the Space Force’s first basic military training on June 22 and 23.