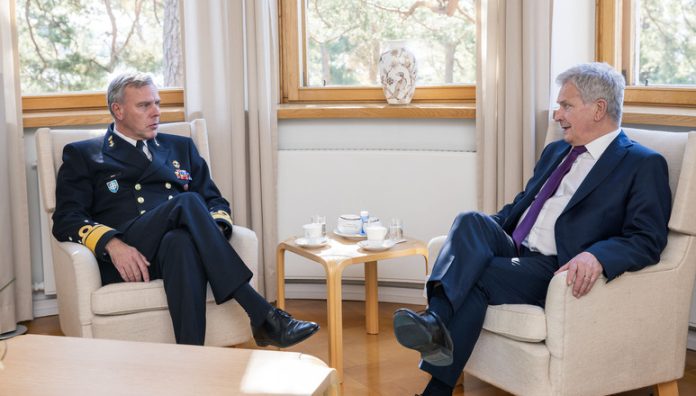 On 17 June 2022, the Chair of the NATO Military Committee, Admiral Rob Bauer, visited Finland upon the invitation of the Commander of the Finnish Defence Forces, General Timo Kivinen. Admiral Bauer met with the Finnish President, Mr. Sauli Niinistö, the Minister of Foreign Affairs, Mr. Pekka Haavisto, and Finland’s Minister of Defence, Mr. Antti Kaikkonen. He also visited the Finnish Navy Command and the European Centre of Excellence for Countering Hybrid Threats.

Admiral Bauer and the President of the Republic of Finland, Mr. Niinistö, discussed NATO-Finland Partnership and Finland’s’ application to join NATO. The Chair highlighted Finland’s value for Euro-Atlantic security: “Finland is one of NATO’s closest partners and a strong contributor to Euro-Atlantic security. We share the same values and face many of the same challenges.”

The close partnership between NATO and Finland was also the main topic discussed during meetings with the Minister of Foreign Affairs of Finland, Mr. Haavisto, and the Minister of Defence, Mr. Kaikkonen. “Finland has considerable military capabilities that are of great value for our shared security. The Finnish Armed Forces are fully interoperable with NATO forces and regularly participate in exercises by NATO or individual Allies.” said Admiral Bauer. He added that NATO membership would facilitate closer Nordic and Baltic defence cooperation, strengthen NATO’s presence in the High North, and boost transatlantic security overall.

Admiral Bauer visited the Finnish Navy Command, where he was received by its Commander, Commodore Tuomas Tiilikainen. He was briefed at the Navy Command on ongoing Finnish maritime activities and Finland’s participation in exercise BALTOPS 22, the premier maritime-focused annual exercise in the Baltic Region. “Throughout BALTOPS 22, over 7,000 troops from 14 Nations have been training essential maritime skills, like medical evacuation, joint personnel recovery, air defence, maritime interdiction operations, anti-submarine warfare, mine countermeasures, and amphibious operations”, commended Admiral Bauer. Finland was also one of the 17 participants in exercise RAMSTEIN LEGACY, an integrated air and missiles defence exercise, which concluded on 16 June.

The country visit concluded with a tour of the European Centre of Excellence for Countering Hybrid Threats (Hybrid CoE), where the Chair was briefed on ongoing activities. The Hybrid CoE provides essential training to help participating nations to counter hybrid threats. Since its establishment in 2017, the Hybrid CoE has been closely cooperating with NATO and the EU and currently includes 31 NATO and EU nations.