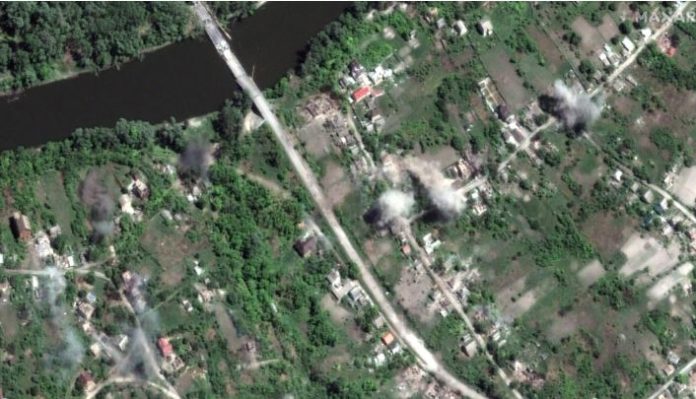 WASHINGTON: As they work to finalize the fiscal 2023 defense policy bill, House lawmakers concerned about gaps in commander’s requirements for intelligence, surveillance, and reconnaissance (ISR) are hopeful a long-awaited Pentagon report will answer some of their urgent questions.

That report, required in the 2020 National Defense Authorization Act (NDAA), is expected “within weeks perhaps” from Undersecretary of Defense for Intelligence and Security (USDI&S) Robert Moultrie, one staffer for the House Armed Services (HASC) subcommittee on intelligence and emerging threats and capabilities told reporters on Tuesday.

That gaps analysis, the staffer explained, is supposed to cover all domains — including space, where the HASC has long been worried about both gaps and duplication of effort among various military and intelligence acquisition authorities. The concern about overlap and duplication has been exacerbated over the last couple of years as the Space Force has moved into the space-based ISR arena long controlled by the National Reconnaissance Office (NRO) and the National Geospatial-Intelligence Agency (NGA).

“It’s something we look at constantly, also in coordination with our colleagues on the House Intelligence Committee. The USDI&S mandated review includes space … because there are major investments obviously, and duplication of effort is a real issue,” the staffer said.

Therefore, the subcommittee’s markup of the 2023 NDAA, approved at a hearing today, has “a number of provisions aimed at ensuring the intelligence and counterintelligence gaps across the combatant commands are identified and making sure we are investing in capabilities to fill those gaps. So that would be everything from tactical Special Operations Command ISR to the larger Defense Intelligence Enterprise investments,” the staffer explained.

Indeed, the markup has a provision specifically aimed at the expressed need by the Special Operations Command (SOCOM) for artificial intelligence (AI) to enable 3D mapping of target areas in contested domains. The language directs SOCOM Commander Gen. Richard Clarke “to assess, and if feasible, field an AI-powered tactical ISR 3D mapping solution.”

That assessment, the markup elaborates, “shall determine if the solution will enhance the current command and control architecture, whether software should be of sufficient capacity to produce two- and three-dimensional maps of a battlespace and if processing should be able to be conducted without a cloud connection. Finally, the assessment shall determine if the software should be interoperable with Group 1-5 unmanned aerial systems and with existing imaging payloads, to include deployability and operability on mobile devices already in the end-user inventory.” (Unmanned Aerial Vehicles, or UAVs, are grouped based on size, one being the smallest.)

The assessment is to be provided to the HASC no later than April 1, 2023.

The subcommittee further is “encouraging the use of commercially available data” to help fill any gaps identified by military commanders, but it also has concerns about overlap in the acquisition of commercial ISR as well as its integration in agency operations — which includes remote sensing imagery and data from commercial satellite operators, the staffer said.

“NRO has been using virtual data for a number of years. And they’ve had some challenges integrating across platforms. So that’s an area where we’re looking at,” the staffer said.

At the same time, the staffer added, “the commercially available data has been actually quite useful in Ukraine, and we’ve received some briefs on that sort of near-real time access.” But the staffer noted that the issue was not one that could be “too deeply” addressed in an unclassified forum.

The DIA is the functional manager within the government responsible for coordinating the acquisition of open-source intelligence from all sources, known as OSINT, explains the subcommittee markup. That report is due no later than Dec. 31.

Beyond DIA’s coordination, the markup also has a provision urging NGA — which is the functional manager for providing geospatial intelligence (GEOINT) to military commanders, the president, and other top civilian leaders — to make as much use of commercially provided data and analysis as possible.

The markup says the HASC “is encouraged” with progress NGA has made to accelerate the collection of commercial analysis, including in developing its “Global Enhanced Geospatial-Intelligence Delivery (G-EGD) into a platform that offers seamless access to diverse data sources for the U.S. Government and allied forces.”

To that end, the subcommittee instructs USDI&S and the NGA director to submit a report no later than Dec. 31 on “data integration at the NGA for commercial imagery, including the status within existing NGA platforms to complete integration for end-user access to commercial domestic satellite imagery capabilities, additional commercial GEOINT sources and analytic capabilities to be integrated into the G-EGD service, and data standards required to effectively and efficiently integrate G-EGD with a broader ecosystem of mission command systems.”