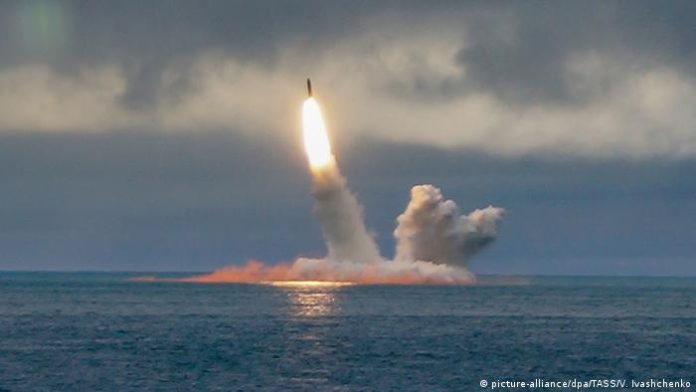 The war in Ukraine could produce a more aggressive Russian nuclear strategy than the one it had prior to the conflict. The poor performance of Russia’s conventional forces is creating a mix of structural conditions that is similar to the collapse of the Soviet Union. Based on Russia’s approach in the post-Soviet period, it will likely place greater emphasis on limited nuclear options and have a lower threshold for nuclear first use. A more aggressive Russian nuclear doctrine would have serious implications for the U.S. extended deterrence in Europe, especially as Sweden and Finland calls for NATO membership.

During the collapse of the Soviet Union Russia’s conventional military was large but of generally poor quality, and a weakened economy meant that rapid improvements in military technology were going to take time. Moscow opted to make up for its conventional weakness by increasing the prominence of nuclear weapons for national security and adopting more aggressive doctrines of a nuclear use. Without viable, conventional means to protect against NATO’s more advanced military forces, Russia would reach for limited nuclear options early in a conflict to demonstrate resolve and the risks of continued aggression.

As Russia modernized its conventional military forces during the 2000s and 2010s it improved its ability to deter conflict and control escalation without crossing the nuclear threshold. These improvements were correlated with changes in nuclear doctrine that set a comparatively higher bar for nuclear weapons use.

To be clear, Russian strategy still allows for nuclear use in a wide variety of circumstances, including if a conventional war threatens “the very existence of the state.” However, compared to the nuclear strategy it adopted in the immediate aftermath of the Soviet Union’s collapse, Russia’s current nuclear strategy is relatively less aggressive.

Russia’s invasion of Ukraine is creating three consequences and conditions that will likely lead Moscow to rely more on its nuclear forces going forward.

First, the war in Ukraine demonstrates the limitations of Russia’s conventional military modernization. Russia’s military has significantly underperformed in Ukraine, despite employing many of its most potent capabilities. Western military aid keeps flowing into Ukraine despite Russian warnings of consequences and the weapons being sent to Ukraine do not represent the most advanced capabilities that NATO could bring to bear in a direct conflict with Russia.  Russian military power, while capable of inflicting a great deal of damage, still lags behind NATO.

Second, Russia will face significant hurdles in correcting this conventional imbalance because its economy is reeling from economic sanctions imposed because of its decision to attack Ukraine. The exposed weaknesses of the Russian military are therefore likely to persist for an extended period. Adjusting its nuclear strategy is an attractive option for Russia because it can be done quickly and on the cheap.

Third, the likely addition of Finland and Sweden to the NATO alliance will push on Russia’s high threat perceptions. In early April, Russian officials warned that admitting the two countries to the alliance would lead to Russian countermoves, including greater deployments of nuclear forces in the Baltic region. Adding Finland to the alliance would greatly improve NATO’s ability to target Russia’s Zapadnaya Litsa naval base, which hosts ballistic missile submarines, and nearby strategic nuclear weapons storage facilities.

Putin brought this situation upon himself by invading Ukraine. Still, it is within the United States’ interest to reduce the likelihood of Russia adopting a more aggressive nuclear strategy. Failing that, the United States should reduce nuclear danger stemming from a potential shift in Russian strategy.

The United States should tread very carefully on the issue of NATO expansion. Sweden and Finland’s rush to join the alliance is understandable but because of Russian threat perceptions, U.S. extended nuclear deterrence becomes more complicated.

If Sweden and Finland’s admission to NATO is a foregone conclusion, the next best way to reduce nuclear risk would be for the alliance to refrain from deploying missile defense and long-range conventional strike systems on the new members’ territory. Moscow has repeatedly cited both types of capabilities as especially threatening to the survivability of its nuclear deterrent. A NATO deployment of long-range conventional strike weapons to Finland would be especially threatening given the proximity of the nuclear submarine base at Zapadnaya Litsa.

Russia’s nuclear strategy is likely heading to a bad place. Its invasion of Ukraine is laying bare the shortcomings of conventional force modernization while also encouraging NATO expansion and worsening Russia’s general security environment. The United States should be aware of the long-term risks and consequences of a more aggressive Russian nuclear strategy. Restraint could help lessen the blow.