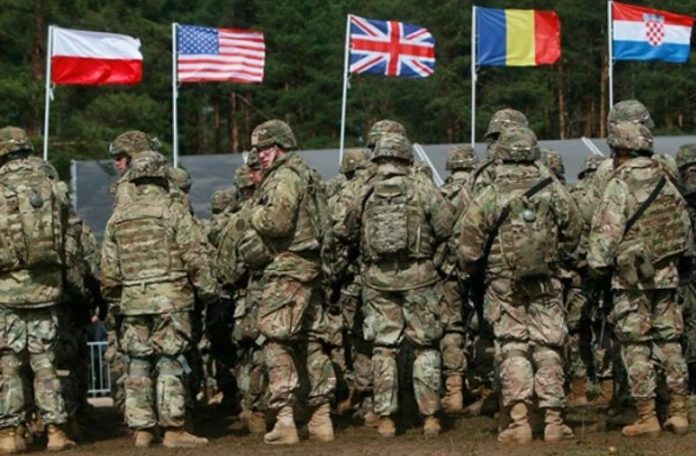 Britain’s defence secretary Ben Wallace put it bluntly: “You don’t have 60 days to get your tanks to Estonia. Because by that stage there will be no Estonia given what the Russians have done in Ukraine.”

Speaking on the sideline of a Nato meeting in Brussels last week, Wallace was not being glib. The Baltic states of Estonia, Latvia and Lithuania — the north-eastern flank of the transatlantic alliance — had long warned of a potential Russian attack before Moscow’s onslaught against Ukraine began in February. Now, as Russia steps up its threats against the Baltic states — including over access to its Kaliningrad exclave — and days before the organisation’s annual summit in Madrid, the debate over the type of support Nato allies should provide them has intensified.

Germany announced last week that it would commit 3,500 extra troops to defend Lithuania, but that it would keep the majority of them stationed at home. Berlin’s approach has support among other Western allies: concerned by the cost of long-term deployments and the possibility of provoking Moscow, they argue that pre-positioning some equipment and flying in troops at short notice is the smarter move. But vulnerable allies, such as Lithuania, say they need thousands of Nato troops, fully armed and supplied, to respond immediately to any Russian attack.

Recommended Rachman Review podcast20 min listen Can EU unity on Ukraine hold? Margarita Šešelgytė, director of the Institute of International Relations and Political Science at Vilnius University, said the German approach “is not a good message for us”. “In terms of our security, [pre-positioned defence forces] is a must. We lack the strategic depth,” she said. “Ukraine was and is able to defend itself because of that . . . Baltic countries in general could be overrun by Russian forces within a week.” Permanent bases, such as those set up by the US in Germany after the second world war, are expensive. Troops travel with their families, requiring sprawling complexes with housing and schools.

Instead, Nato’s “enhanced forward presence” of foreign-led battle groups in eastern countries set up in 2017 and expanded this spring, relies on “unaccompanied” troop deployments — soldiers on temporary rotation, in other words, sometimes living in tents, like an extended military exercise. “I think that this is the way forward,” said Kajsa Ollongren, the Dutch defence minister. “We agree on the German approach which I think fits a strategy that we should have for the whole eastern flank of Nato, which means a stronger posture, but it’s also flexible.” “It’s also more sustainable, because you don’t have to have everything and everybody in place, but you have to be very quick in response and have the forces ready,” she added. The Netherlands contributes troops to the German-led Nato battlegroup in Lithuania.

The UK leads the battlegroup in Estonia, Canada in Latvia and the US in Poland. Recommended Nato Estonia’s prime minister urges vast rise in Nato forces to defend Baltic states Many Nato capitals argue that a more nimble approach, with the ability to deploy quickly where necessary, is a better deterrent than fixed defences that any potential invader could plan to avoid. But that relies on vulnerable frontier states trusting that their allies would deploy quickly enough and with the necessary force to repel a concentrated attack.

The US 82nd Airborne boasts of its ability to deploy anywhere on the planet within 18 hours. But few, if any, other fighting units of their size and competence can match that. Before Russia’s renewed invasion of Ukraine in February, Nato spoke of a “tripwire” strategy, where a few thousand troops in eastern countries would serve as an initial attack deterrent, before serious reinforcements arrived.

That is no longer seen as tenable. In the opening hours of Vladimir Putin’s attack in February, western intelligence officials warned that Kyiv would probably fall in three days, given the scale of the onslaught. In reality, a combination of Russian strategic mistakes and successful Ukrainian counter-attacks stalled that initial assault. The Baltics worry that if Putin has learned from that failure, the Nato cavalry would arrive too late to prevent the fall of their capitals.

“[The eastern allies] won the argument that the tripwire strategy was not really up to what we have seen happen in Ukraine,” said Wallace. “The first fight is the most important fight.”