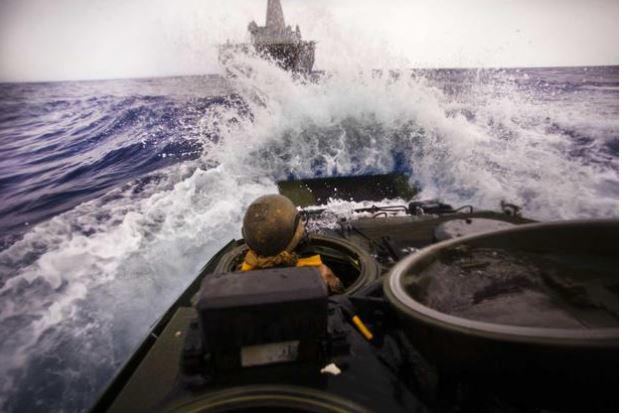 The Marine Corps announced that it is restricting its amphibious assault vehicles (AAVs) from operating in the water for the foreseeable future — a major limitation for a vehicle designed to take Marines from ship to shore.

Eight Marines and a Navy corpsman died when an AAV sank hundreds of feet into the ocean during exercises on July 30, 2020.

A series of four subsequent investigations by the Marine Corps and the Navy found that no single problem caused the AAV to sink that day. Instead, a combination of poor maintenance and training, safety shortcuts, and mechanical failures led to the fatal mishap that Marine leaders have said was “preventable.”

The decision to keep the AAVs out of the water comes two months after the release of the last of those reports.

“The Commandant of the Marine Corps has decided the AAV will no longer serve as part of regularly scheduled deployments or train in the water during military exercises; AAVs will only return to operating in the water if needed for crisis response,” Marine Corps spokesman Maj. James Stenger said in a statement emailed to Military.com on Wednesday.

The AAVs have been in service since the 1970s.

Stenger said that the Corps “stands by the efficacy of the recommendations that came from the multiple investigations into the AAV mishap” and that “the AAV is a safe and effective vehicle for amphibious operations.”

The vehicle is being restricted to land “in the interest of the long-term health of the amphibious vehicle programs and future capabilities.” Military.com asked for more details on what this means but did not immediately get a response.

The service emphasized that “76% of [the AAV’s] tasks are land-based.”

The news also comes amid troubles for the AAV’s replacement — the Amphibious Combat Vehicle (ACV).

Stenger’s statement noted that “ACVs were temporarily suspended from open ocean waterborne operations as we worked to solve an issue that was identified with the towing mechanism.”

“We expect that issue to be resolved soon and for ACVs to return to the water early in the New Year.”

The Marines said that they “reserve the capability to reverse this decision should the need arise.”