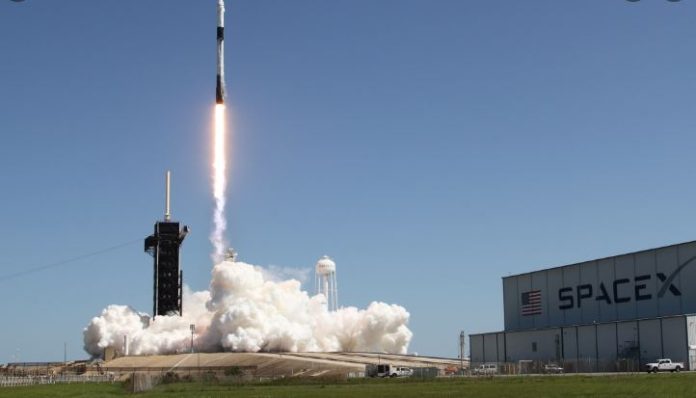 Elon Musk just tweeted out a first look at the 60 satellites that are part of a bold plan to make high-speed internet access available around the world.

Musk’s rocket company SpaceX plans to launch these “Starlink” satellites on Wednesday, with an end goal of nearly 12,000 satellites orbiting in space.

Musk also shared new details of how many satellites would be required for “minor” and “moderate” internet coverage.

Elon Musk just gave us the first look at his rocket company’s bold plan to bring ultra-high-speed internet to the entire world.

Musk tweeted out an image of 60 satellites packed into SpaceX’s Falcon rocket on Saturday, along with fresh details about the global satellite networking gambit.

SpaceX currently plans to launch the rocket on Wednesday, Musk said, promising more information then. It’s scheduled for between 10:30 p.m. ET and 12 a.m. ET on Wednesday night, aboard a 230-foot-tall Falcon 9 rocket.

“Much will likely go wrong on 1st mission,” Musk tweeted.

These “Starlink” satellites are named after Musk’s plans for a network of satellites orbiting in space.

The splashy plan was first announced in 2015 and aims at an eventual fleet of nearly 12,000 satellites. SpaceX has been ramping up fundraising in preparation for that and another high-profile project.

If the iconoclastic entrepreneur meets his goals, internet users around the world could see internet speeds that are around 40 times faster, no matter where they live. Musk and Space X have not said how much they would charge for the service, Business Insider previously reported.

This will not be SpaceX’s first launch of the satellites. The rocket company previously launched two of the experimental satellites in late February.

But those satellites, named “Tintin A” and “Tintin B,” were trial satellites, and the latest are production design-level, Musk said on Saturday.

Musk also shared a game plan for SpaceX moving forward. To get minor internet coverage, “6 more launches of 60 [satellites are] needed,” Musk said, while moderate coverage would require 12. SpaceX has said it aims to have internet coverage available starting in 2020.

As one Twitter user noted in response to Musk, six additional launches of 60 satellites comes to 420 statellites total. Musk was famously fined $20 million by the SEC for claiming that he might take Tesla public at $420 a share.

“That *might* not be my lucky number,” Musk joked.

Though the first Starlink launch will take place on a Falcon rocket, the company has been working for years on an ambitious launch system called Starship.

Musk said he’ll announce new details about the two-stage vehicle around June 20, but his previous statements suggest it may stand nearly 400 feet tall, be fully reusable, and lug perhaps 150 tons of cargo into orbit.

If Starship becomes operational in the early 2020s, as Musk hopes it will, the spacecraft may be able to deploy hundreds of Starlink satellites at a time instead of dozens. What’s more, a Starship designed for people may be poised to launch them to the moon and perhaps Mars.