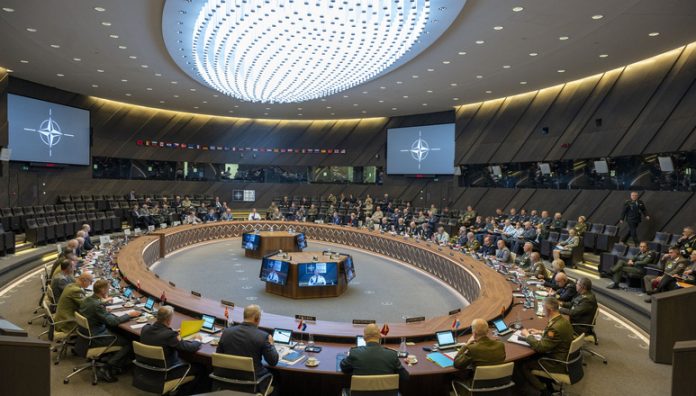 NATO’s highest Military Authority, the Military Committee, will meet in person on 19 May 2022, in Brussels, Belgium. Admiral Rob Bauer, Chair of the Military Committee, will preside over the meeting, which will be attended by the Allied Chiefs of Defence. They will be supported by General Tod Wolters, Supreme Allied Commander Europe (SACEUR) and General Philippe Lavigne, Supreme Allied Commander Transformation (SACT) who will each lead a respective session.

The meeting of the NATO Military Committee in Chiefs of Defence Session (MCCS) will enable the 30 Allied Chiefs of Defence to meet and discuss issues of strategic importance to the Alliance. NATO Secretary General Jens Stoltenberg will join the Chiefs of Defence for the first session to address the geostrategic context and preparations for the Madrid Summit in June. The second session will be dedicated to Russia’s war in Ukraine, with the Chiefs of Defence from NATO Partner Nations Finland, Sweden and Ukraine joining the discussions.

Session three will be led by General Wolters (SACEUR) and shall focus on the implementation of the Concept for the Deterrence and Defence of the Euro-Atlantic Area (DDA), as well as on NATO’s longer-term posture. The Chiefs of Defence will then meet with NATO’s Asia-Pacific Partners Australia, Japan, New Zealand, and the Republic of Korea, to discuss regional developments. This will be followed by a session led by General Lavigne (SACT), in which the Chiefs of Defence will focus on the NATO Warfighting Capstone Concept (NWCC).

Media representatives holding a valid 2022 NATO Media pass will have access as usual to the NATO HQ. Media representatives wishing to attend the press conference are invited to contact the NATO IMS Public Affairs and Strategic Communications Office via email (ronaynecasimiro.lara@hq.nato.int) with a completed accreditation form no later than 12h00 on Thursday 12 May 2022.

Media passes will not be mailed to applicants; they must be collected in person upon presentation of an ID card or passport and a valid national press pass (or accreditation letter from a recognized media organization). Media representatives will be given their accreditation at the Guard House South, NATO Headquarters, Boulevard Leopold III, Brussels, Belgium.

Passes must be worn visibly at all times, and security personnel may ask to see another form of ID at any time. Media representatives are informed that security personnel will examine and may test equipment and personal effects carried onto the site and are advised to arrive with sufficient lead time to clear security checks.

Following each event, photos, video and audio files will be made available on the NATO IMS webpage www.nato.int/ims, as well as on the Military Committee in Chiefs of Defence session (MCCS) event page.

We will post the latest information and photos from the MCCS on the following Twitter accounts: @NATO_PASCAD and @CMC_NATO.
Please use the hashtags #NATOCHoDs and #NATOMC when tweeting about the NATO Military Committee.