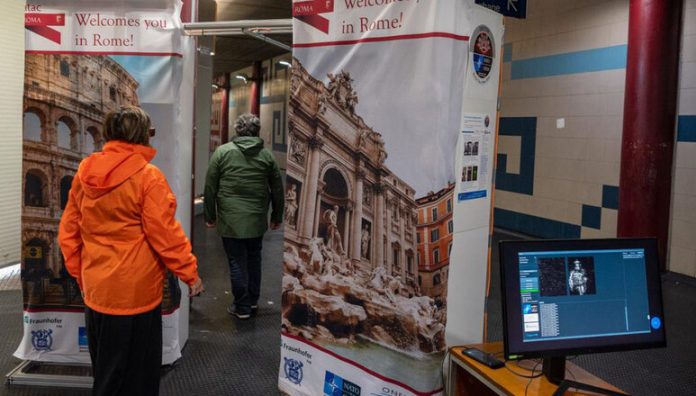 Subway stations, airports, and other mass transit and gathering venues across the world have been targeted by terrorist attacks, leading to loss of life and damage to infrastructure. With DEXTER – short for Detection of EXplosives and firearms to counter TERrorism – NATO has developed the prototype of a technology to counter the threat from firearms and explosives in crowded venues. After three years of research supported by the NATO Science for Peace and Security (SPS) Programme, a one-month testing of the prototype was was successfully completed in a subway station in Rome, Italy.

On 24 and 25 May 2022, representatives from the industry and government stakeholders were invited to observe the real-life scenario simulation and explore opportunities with a view to a potential commercialization of DEXTER.

The three technologies developed through DEXTER will allow the identification of carriers of firearms and explosives among moving pedestrians, remotely and in real time. The system will move beyond the measures currently in place, and enable the detection of these threats discretely, without requiring random checks on moving passengers or checkpoints. DEXTER integrates the technologies in a capability that can incorporate additional detection systems as necessary to keep up with evolving threats.

“What DEXTER has delivered is a solution at the crossroads between counter-terrorism and advanced ltechnologies, in line with NATO strategic objectives and priorities” stated NATO Assistant Secretary General for Emerging Security Challenges, David van Weel. DEXTER is an important deliverable of NATO’s Counter-Terrorism Action Plan. At the same time, by relying on the most recent advancements on sensors, detection and artificial intelligence, DEXTER represents a perfect example of NATO’s agenda in the field of Emerging and Disruptive Technologies (EDTs).

“Results like this are not only the outcome of scientific and technological skills but are also based on a strong sense of cohesion between the partners, and on the common will to enhance the protection of citizens from brutal attacks like the ones in the past.” declared Gilberto Dialuce, President of ENEA – the Italian National Agency for New Technologies, Energy and Sustainable Economic Development. Eleven governmental and research institutions from 4 NATO countries (France, Germany, Italy and the Netherlands) and 4 partner nations (Finland, Republic of Korea, Serbia and Ukraine) participated in DEXTER.