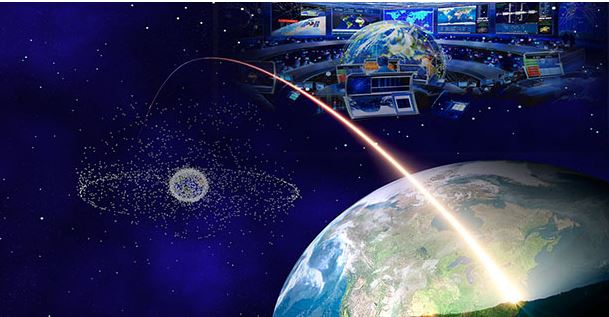 WASHINGTON: A number of US allies may now join Space Command in the US military’s baseline plan for protecting and defending satellites during war, Operation Olympic Defender, we hear, following in the footsteps of the first country to sign up, the United Kingdom.

SPACECOM today announced its leader, Gen. Jay Raymond, has signed the first order under OOD in his capacity as head of the combatant command. OOD is the US military’s operational plan for protecting and defending the US and allied satellites in conflict.

“This is a major milestone for the newly established command,” Raymond said. “As the threats in the space domain continue to evolve, it is important we leverage and synchronize capabilities with our allies not only to understand each other’s national perspectives but to work seamlessly together to optimize our multinational space efforts.”

Strategic Command created OOD in 2013 as the foundational plan for how the military will protect and defend the US and allied satellites in a conflict. As Breaking D readers know, OOD was updated in 2018 to open up allied participation.

“The purpose of OOD is to strengthen allies’ abilities to deter hostile acts in space, strengthen deterrence against hostile actors, and reduce the spread of debris orbiting the earth,” the SPACECOM release explains.

OOD is only one of a number of operational plans for space war Raymond has been working on since SPACECOM was established as a geographic command with an area of responsibility (AOR) 100 kilometers above sea level and up to infinity.

He told reporters yesterday that he last week inked the new “campaign plan” for SPACECOM’s day-to-day operations; every Combatant Command has such a campaign plan; this will be SPACECOM’s first. “That’s our foundational plan if you will,” Raymond explained, “that drives our day-to-day activities across the command of SPACECOM.”

In addition, SPACECOM now has responsibility for developing, updating and enacting when the ball drops specialized contingency plans for space war, mapped to specific adversary countries. Former Secretary of Defense Ash Carter back in 2016 set the precedent, naming Russia, China, Iran and North Korea as the key strategic challengers to the US military.

In this Game Changer article, we discuss how Internet Operations Management addresses the issue of centralized visibility and operational control.

SPACECOM’s announcement today also noted that the United Kingdom was the first ally to publicly acknowledge this past July its participation in OOD. London subsequently sent additional personnel to Combined Space Operations Center (CSpOC) and the 18th Space Control Squadron at Vandenberg AFB to support its decision, SPACECOM added. CSpOC is responsible for command and control of day-to-day space operations and includes allies representation. The 18th Space Control Squadron is responsible for space domain awareness operations.

Up to now, many allies were leery of signing up due to the fact that space operations were being commanded by STRATCOM, which also oversees US nuclear war planning. Public opinion in many US allies, such as Germany and Italy, traditionally has been strongly anti-nuclear. It is not by chance that even the UK, which had joined OOD under STRATCOM’s control, kept its participation silent until now.

“Some of those same concerns were initially raised about having USSTRATCOM be the lead agency for signing SSA data sharing agreements with other countries,” noted Brian Weeden, head of program planning at Secure World Foundation and a former Air Force officer who worked on space situational awareness operations at STRATCOM.

“But the hesitation to include allies in Olympic Defender was on our end as well,” Weeden added. “National security space is sort of the last bastion of America’s “crown jewels” and there are a lot of people in that community who are very reluctant to open the kimono to our allies, even the allies who we’ve been deeply collaborating on intelligence sharing for decades.”

DoD and expert sources say interest in participation in space war planning has increased not just because of SPACECOM’s standup, but also because concerns about Russian and Chinese efforts to build up their military space capabilities.

Indeed, NATO in December declared space an operational domain of joint allied action — albeit insisted that this does not mean NATO endorses space weaponization. France last summer adopted an aggressive space strategy, including pursuit of offensive anti-satellite weapons. Japan on May 19 announced its new Space Operations Squadron, under the Japanese Air-Self Defense Force, to monitor and protect Japanese satellites.

For example, the number of countries signing SSA agreements with DoD has jumped to 25, with Peru signing a memorandum of understanding with SPACECOM just last week to gain access to data about space objects collected by the military’s Space Surveillance Network of radar and optical telescopes, as well as data to help the country’s satellites avoid on-orbit collisions.

“This agreement will give Peru access to the highest quality satellite tracking data available to assist them with PerúSat-1 and its eventual follow-on and will provide a linkage to the experts at the 18th Space Control Squadron. In addition, the SSA Agreement enables Peru to request seven advanced services available only to agreement holders,” SPACECOM said in a May 12 announcement.

Spain, France and Italy — all of which operate military satellites — have expressed interest in participating in OOD, we are told. Besides the UK, the other members of the so-called “Five Eyes” — Australia, Canada and New Zealand — who already shared intelligence with the US are expected to join in.

Although Germany has been hesitant to be seen as pro-space weapons, Berlin has a sophisticated military space program and is unlikely to stay outside of operational planning if rival France joins in.

Japan too can be expected to sign on, as it has been seeking myriad ways to be more active in partnering with the US military on space protection — including agreeing to host US military payloads on Japanese satellites.