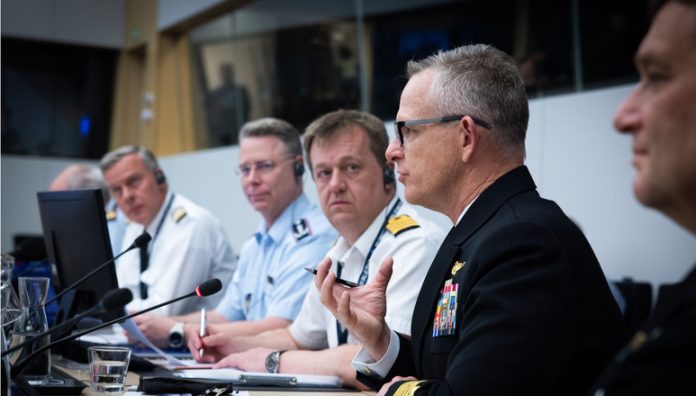 On 5 May 2022 Vice Admiral Daniel W. Dwyer, Commander of Joint Force Command Norfolk (JFC Norfolk), briefed the NATO Military Committee on the current activities and future objectives of the Command. The mission of JFC Norfolk is to protect the Strategic Lines of Communication across all domains, protect sea-lanes between Europe and North America, and enable the reinforcement of Europe.

In his welcoming remarks, Admiral Rob Bauer, Chair of the Military Committee, highlighted the important tasks JFC Norfolk fulfills for the Alliance: “From the Arctic to the Tropic of Cancer, from Florida to Finnmark, from seabed to space, you are providing critical leadership across the transatlantic region.”

Vice Admiral Dwyer stressed that NATO remains focused on 360-degree coverage of SACEUR’s Area of Operations, despite the increased attention that is devoted to the Eastern Flank.  JFC Norfolk’s area of responsibility physically and symbolically forms the heart of the Alliance’ Area of Operations. Since declaring Full Operational Capability in July 2021, JFC Norfolk has been actively monitoring the North Atlantic through to the Arctic to ensure NATO’s strategic transatlantic lines of communication remain open in order to support the sustainment of Europe. A focal point for this work will be Exercise DYNAMIC MONGOOSE in June, led by NATO’s Maritime Command. It will test and validate NATO’s ability to conduct complex all domain defence against underwater threats. Dwyer: “Every single person at JFC Norfolk understands and is fully committed to our mission. NATO is, and always will be, a defensive alliance, and the priority of all activities is to deter adversaries from aggressive action.”

JFC Norfolk provides operational level coordination between NATO and national military commands in Europe and North America. It is responsible for planning, conducting, and assessing operations in the North Atlantic and High North. As one of three regionally focused joint, operational-level commands reporting directly to Supreme Allied Commander Europe it is the only operational NATO command based in North America. The other two existing Joint Force Commands are located in Brunssum, Netherlands, and Naples, Italy.