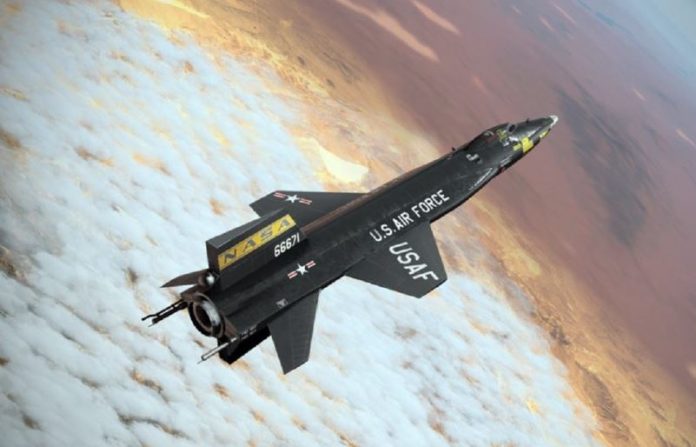 X-15 – A Truly Special X-Plane – Before Al Shepherd lobbed into space aboard a Mercury capsule, before John Glenn made his three orbits, and long before Neil Armstrong stepped onto the lunar surface, the aerospace community engaged in a fierce debate: Who would take Americans into space? And what vehicle would carry them there?

The U.S. Air Force lobbied that they, not the nascent NACA (soon to be NASA), should ferry American astronauts into space. And the Air Force, masters of powered flight, advocated that their men should fly into space, in controlled fligh, rather than “spam-in-a-can”-style, in a capsule aboard a rocket. To make the case that one could indeed fly into space and explore the stars with dignity and composure, the Air Force would need a special machine: the fastest, highest-flying aircraft ever built – the North American X-15.

The X-15, Still the Fastest

The X-15 is built around a rocket. Originally, the aircraft relied on the XLR11 rocket engine – the same engine featured in the Bell X-1 (the first jet ever to break the sound barrier). But after just 24 flights, the XLR11 was swapped out in favor of the XLR99. Developed by Reaction Motors, the XLR99 generated a crushing 57,000 pounds of thrust. This rocket engine used anhydrous ammonia and liquid oxygen as a propellant, and it was gluttonous: The XLR99 could burn 15,000 pounds of propellant in just 80 seconds. In doing so, the X-15 set speed and altitude records that still stand.

In effect, these X-15 pilots indeed flew into space, validating that an alternative to spam-in-a-can-style space flight does exist. All of the pilots who crossed the 50-mile threshold were eventually awarded astronaut wings, including Joseph A. Walker, who still holds the record for the highest altitude ever reached. Walker flew 67 miles high on Aug. 22, 1963.

The X-15 did not take off from a runway like a typical plane. Instead, the aircraft was released from a wing pylon on its mothership, the B-52 Stratofortress. The eight-engine B-52 was so big and so powerful, it could take off with the X-15 simply tucked under a wing. Once the desired altitude was attained, the B-52 would drop the X-15, whose rockets would ignite, flying it away under its own power. Before NASA’s Mercury capsule was chosen as the vessel of American spaceflight, Air Force and NACA officials discussed the possibility of launching an X-15 into orbit using an SM-64 Navaho missile, a scheme that foretells the Space Shuttle flights that would commence two decades later.

While the space race moved forward without the X-15, the rocket plane gleaned valuable insights into aircraft and spacecraft design, and these helped accelerate U.S. space exploration. The X-15 was retired in 1968. Only three of the aircraft were ever built. The program is perhaps best remembered for one of its pilots. Neil Armstrong, the first man to ever walk on the moon, proved his mettle on eleven X-15 flights.