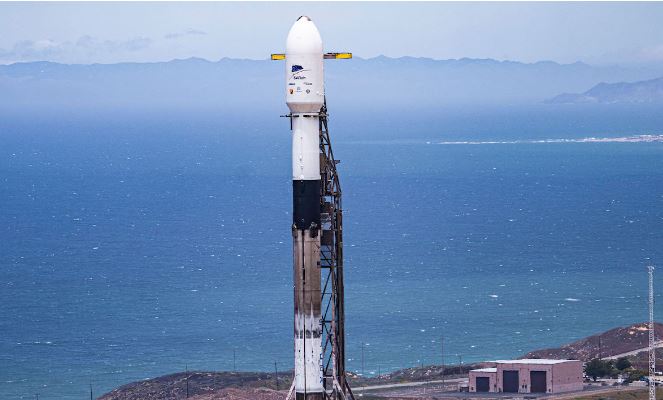 The first satellite in a nearly billion-dollar program to provide the German military with improved radar surveillance imagery from space is set to rocket into a polar orbit Saturday from California’s Central Coast on a SpaceX Falcon 9 launcher.

The synthetic aperture radar imaging satellite, called SARah 1, is nestled in the nose cone of the 229-foot-tall (70-meter) Falcon 9 rocket for liftoff at 7:19 a.m. PDT (10:19 a.m. EDT; 1419 GMT) Saturday from Vandenberg Space Force Base in California, located on the Pacific coast between Los Angeles and San Francisco.

SARah 1 is the first of three radar imaging satellites the German government ordered from industry in 2013. OHB, based in Bremen, is the lead contractor on the SARah program and is building the second and third satellites in the series. Airbus teams in southern Germany manufactured the first and largest satellite in the program, named SARah 1, which awaits launch Saturday from California.

When the development contracts were signed in 2013, the launches of the SARah satellites were planned in 2018 and 2019. But satellite-related technical problems, efforts to improve encryption on the spacecraft, and delays caused by the COVID-19 pandemic pushed back the first SARah spacecraft launch until 2022.

SpaceX will deliver the SARah 1 satellite to an orbit a few hundred miles above Earth, where it will start a 10-year mission providing reconnaissance imagery to the Bundeswehr, the Germany military.

The Falcon 9 rocket will climb away from Space Launch Complex 4-East at Vandenberg powered by nine kerosene-fueled Merlin 1D engines, generating more than 1.7 million pounds of thrust. The engines will steer the rocket downrange toward the south over the Pacific Ocean before the Falcon 9’s first and second stages separate more than two minutes into the mission.

The booster stage will pulse cold gas thrusters to flip around and fly tail first, then reignite three of its engines for a boost-back burn to reverse course and begin a return trip to Vandenberg. The boost-back maneuver will occur while the Falcon 9’s first stage flies at the edge of space at an altitude of around 350,000 feet or more than 100 kilometers.

The return maneuvers will culminate in the booster stage’s propulsive touchdown at Landing Zone 4, just a quarter-mile west of the Falcon 9 launch pad at Vandenberg. The landing is expected about eight minutes after liftoff to complete the third flight to space for this booster, tail number B1071.

The flight plan for the Falcon 9’s upper stage after jettisoning the rocket’s payload shroud remains secret. SpaceX did not list any additional second-stage flight events, or the time of spacecraft deployment, in an online timeline of the mission.

The second stage will likely fire two times to inject the SARah 1 satellite into the proper orbit for separation.

The SARah 1 satellite weighs about four tons, according to its manufacturer Airbus. The contractor said in a statement that the SARah 1 satellite carries the “latest, highest-resolution radar technology” to collect all-weather, day-and-night imagery of sites around the world for the German military.

“This technology offers the advantages of very fast pointing and very flexible shaping of the antenna beam to deliver imagery in record time,” Airbus said in a press release.

Radar imaging satellites have the benefit of resolving Earth’s surface through darkness and cloud cover, which prevent optical spy satellites from always seeing the ground.

The three SARah satellites are replacing the German military’s five-spacecraft SAR-Lupe constellation, which launched from 2006 through 2008.

“Today, without satellites, reconnaissance, communication, and navigation are almost impossible,” the German military said in a press release earlier this month.

“The new SARah satellites ensure that the Bundeswehr has the capability for worldwide imaging reconnaissance independent of the time of day or the weather,” the German military said. “At the same time, they provide support in the early detection and management of crises.”

The launch Saturday from California is the second of three Falcon 9 missions scheduled in about 36 hours.

A Falcon 9 rocket took off Friday at 12:09 p.m. EDT (1609 GMT) from the Kennedy Space Center in Florida with 53 more Starlink internet satellites. After the SARah 1 mission, SpaceX’s launch team in Florida will be back in action for another Falcon 9 liftoff from Cape Canaveral Space Force Station at 12:27 a.m. EDT (0427 GMT) Sunday carrying a spare Globalstar commercial messaging and data relay satellite into orbit.

The launches mark the 24th, 25th, and 26th SpaceX missions of the year. Saturday’s flight from California will be the 159th launch of a Falcon 9 rocket overall, and the 24th from Vandenberg.

The weather forecast looks favorable for launch Saturday, with a 90% chance of good weather at Vandenberg. The only slight weather concern is associated with ground winds.

At launch time, forecasters predict patchy fog and mist, a deck of scattered stratus clouds from 1,100 feet to 1,300 feet in altitude, with temperatures at the launch site in the lower 50s Fahrenheit. There’s a 100% chance of acceptable weather for launch on the backup day Sunday.