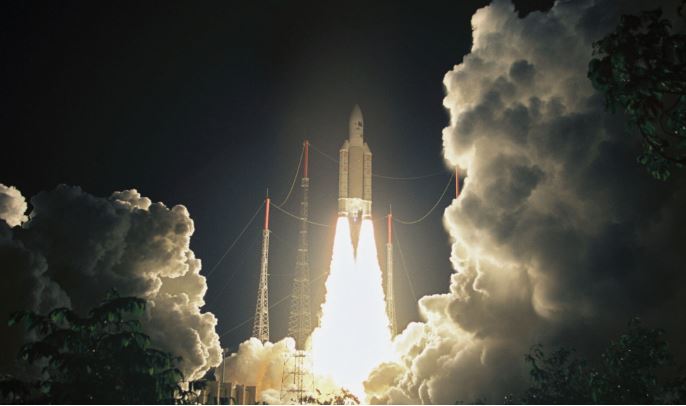 WASHINGTON: The House Armed Services strategic forces subcommittee is calling on the National Reconnaissance Office to both expand and accelerate its current pilot program to acquire imagery from commercial operators of synthetic aperture radar (SAR) sats.

The provision in the subcommittee’s markup of the fiscal 2023 National Defense Authorization Act, released today, comes in the wake of the heavy use of commercial SAR data by the NRO in the Ukraine war — both to publicize Russia’s military actions on the ground and to allow sharing of imagery for intelligence, surveillance, and reconnaissance (ISR) purposes with allies, including Kiev.

SAR sats, which can image through clouds and at night, have been particularly useful in Ukraine, where there is often heavy cloud cover this time of year. Imagery from NRO’s own SAR (and other spy satellites), however, is highly classified, and the process of de-classifying it to share even with close allies is often too long to keep pace with a hot war.

“The committee encourages the Director of NRO to expand the current synthetic aperture radar (SAR) commercial acquisition program beyond its pilot program status,” the markup of the annual defense policy bill states.

“As the demand across the Department increases for geospatial intelligence (GEOINT), the committee further encourages the NRO to continue pursuing commercial SAR GEOINT, with open competition to be responsive to the requirements of the National Geospatial-Intelligence Agency and the combatant commands, functional commands, and other key elements of the Armed Forces,” it continues.

The lawmakers recommend that NRO “accelerate, to the extent possible, their adoption and integration of proven highly capable U.S. commercial SAR systems” to fill demand gaps, and provide “on-ramps” for commercial providers.

Pete Muend, the spy agency’s head of commercial operations, at the GEOINT 2022 conference in April praised the Ukraine performance of commercial SAR firms, especially Capella, but told reporters NRO had no plans to accelerate the movement from the pilot to a program of record, as has been done with commercial providers of electro-optical imagery.

The subcommittee directs NRO Director Chris Scolese to provide a report on commercial SAR acquisition, including plans to transition to operational contracts, no later than Dec. 31 to the HASC and the House Permanent Select Committee on Intelligence.

The markup also calls for a comprehensive report on how DoD plans to leverage ISR data from commercial radio frequency (RF) satellites, noting that lawmakers have been “encouraged” by the successful use of RF geolocation in exercises, including by European Command.

RF geolocation satellites work by detecting the sources of RF emissions on Earth. For example, they can pinpoint the location of GPS jammers, as well as the Automatic Identification System (AIS) signals used by ships to identify themselves and broadcast their location.

That report is to cover planned combatant command use of commercial RF capabilities through 2024 in such demonstrations, and the language, in particular, asks how the results can be translated into requirements for actual products and data.

For its part, NRO has plans to move ahead this summer with a pilot program to test commercial RF geolocation capabilities, similar to that being used for commercial SAR. The spy-sat agency in 2019 launched a study contract with RF geolocation provider Hawkeye 360, headquartered in Virginia, and was has been using imagery provided to keep tabs on Ukraine.

The subcommittee’s hearing on the markup will take place Wednesday at noon.