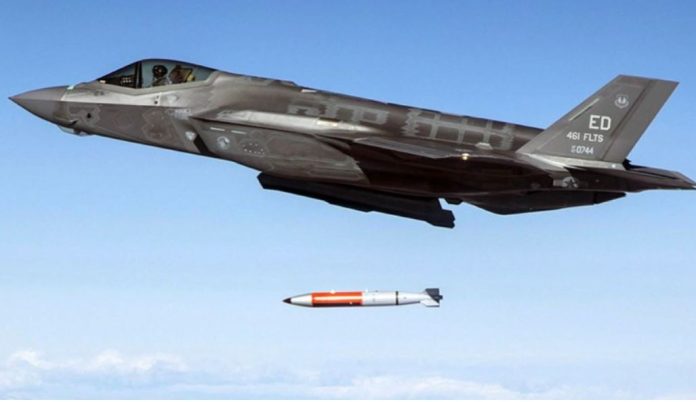 A pair of F-35s from Nellis Air Force Base in Nevada released dummy nuclear bombs at a nearby test range this month, moving the advanced stealth fighter closer to carrying the world’s most powerful weapons into combat, the Air Force said Monday.

The flights on Sept. 21 marked the “graduation” test exercise necessary for the Air Force variant of the F-35 to move ahead with what’s called the nuclear design certification process, according to the service’s press release.

It’s still not clear when the F-35A will receive its full nuclear certification allowing it to move from training ranges and dummy bombs to real-world battlefields. But when that happens, the Air Force will have a second stealth aircraft in its fleet that can carry nukes.

F-15E Strike Eagle and F-16C and D Fighting Falcon fighters do not have stealth capability but can carry nuclear weapons. The B-21 Raider heavy bomber will also have the capability and is expected to join the Air Force’s fleet in the mid-2020s, according to the latest estimates.

Not all F-35As in the Air Force’s fleet will become nuclear-capable. Only fighters in units with a nuclear mission will receive the hardware upgrades, and the manpower, to be able to carry nukes.

The F-35s in the Nevada test were each armed with a dummy version of the B61-12 gravity nuclear weapon. That nuclear weapon is about 12 feet long and weighs approximately 825 pounds, according to the U.S. Department of Energy.

The Federation of American Scientists wrote in 2016 that its explosive yield can be adjusted up to as much as 50 kilotons, or the equivalent of 50,000 tons of TNT. That is far from the most powerful weapon in the United States’ arsenal, but several times the size of the bomb dropped over Hiroshima, Japan, during World War II.

Joint test assemblies are mock-ups of nuclear weapons that carry sensors and instruments to collect and store data measuring how well they performed, but they contain no nuclear material and cannot produce a nuclear explosion.

The 422nd and 59th Test and Evaluation Squadrons at Nellis took the lead in the flight test. The Air Force Nuclear Weapons Center, the F-35 Joint Program Office, Sandia National Laboratories, and other components within Air Combat Command also worked together on the test.

The departments of Defense and Energy now are analyzing the data collected in the test.