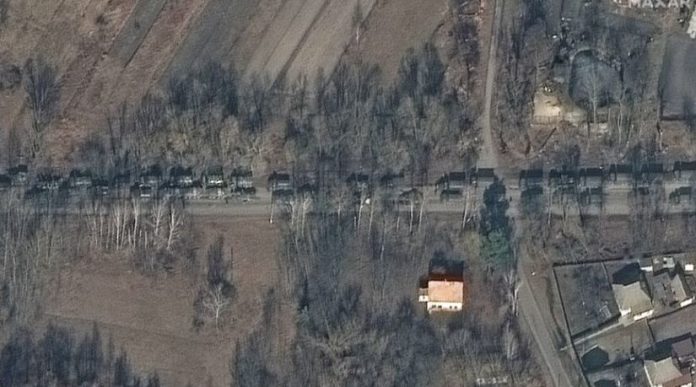 Throughout Russia’s invasion and offensive in Ukraine, some of the most compelling images of the war have come from satellites in space operated by private companies.

“For many of us who have been tirelessly watching this conflict from our TVs or smartphones, some of the most iconic scenes which come to mind are those of a huge Russian military convoy, stretching more than 60 kilometers northwest of Kyiv,” commented tech industry consultant Chetan Woodun.

The convoy image, taken by one of Maxar’s WorldView satellites, was one of many taken by Maxar and other commercial operators like BlackSky and Planet. Commercial radar imagery from the likes of Capella Space, Umbra, and Iceye also have been in high demand, as only radar can penetrate the heavy cloud coverage over Ukraine.

Earth observation companies have shared visuals that previously would only come from government sources. Most recently, Maxar identified the location of a mass grave outside Mariupol in eastern Ukraine. The company tracked the gradual expansion of the grave over several weeks as Russian forces escalated the fight to take over the city.

The way commercial spy satellites have shaped the narrative of this war has elicited comparisons to the Persian Gulf War more than 30 years ago when 24-hour news coverage — much of it live via satellite — showcased the dramatic effects of GPS technology on military operations.

“If Desert Storm was the first space war, I see Ukraine as the first commercial imagery conflict,” said Michael Moran, a retired U.S. Air Force officer and now senior vice president of defense and intelligence systems at Terran Orbital. The company is building a constellation of radar imaging satellites aimed at military and government users.

For years, U.S. intelligence agencies have been skeptical of commercial systems, but he said this conflict settles the debate. “Commercial systems can really augment national capabilities for the United States.”

A realization of the value of commercial space systems also could have long-term implications for military strategy.

“This is changing the way we fight, the way that the world is able to see the fight,” said Todd Harrison, a defense analyst and senior fellow at the Center for Strategic and International Studies.

The impact of satellite imagery in the Ukraine war could change China’s calculus about a future invasion of Taiwan, Harrison said.

“If you’re China and you’re watching the situation, one of the lessons they may learn is, ‘I don’t want commercial space to be used against me the way it was used against Russia,’” he said.

“A country like China would have a strong incentive to go after commercial companies in the very early phases of a conflict, maybe pre-conflict, in order to kind of shut off the world’s view of what’s happening,” Harrison said. “It’s something we have to expect and prepare for.”

The good news on that front is that reliance on commercial satellites makes the entire U.S. government-industry architecture more resilient and more difficult for an enemy to defeat.

Another lesson from Ukraine is that Russia’s preferred antisatellite weapons are non-kinetic — jammers and cyberattacks — which have temporary and reversible effects, said Brain Weeden, the space policy expert at the Secure World Foundation.

“They are not blowing up satellites. They’re going after the interference and denial of service,” he added.

Russia, of course, showed in November that it is capable of taking down a satellite in orbit with a missile “but the fact of the matter is that kinetic capability is not all that useful when you’re talking about dozens to hundreds of satellites you might have to target.”