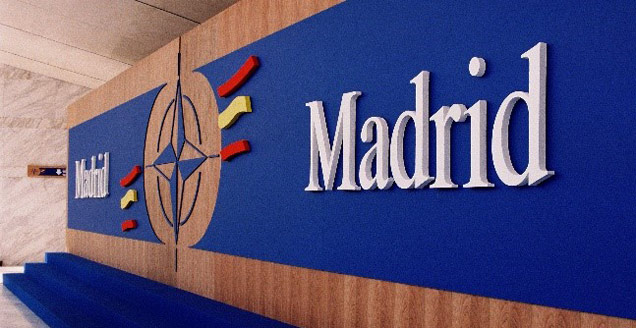 NATO Leaders are gathering in Madrid, Spain to discuss important issues facing the Alliance. The Madrid Summit will set NATO’s strategic direction for the next decade and beyond, ensuring that the Alliance will continue to adapt to a changing world and keep its one billion people safe.

Hispania, the national personification of Spain, holds aloft a laurel wreath in front of the Spanish flag. The statue sits atop the National Library of Spain in Madrid. (Photo credit: Jesus G. Feria/La Razon)

Spain is hosting the 2022 NATO Summit in an auspicious year – the 40th anniversary of its accession to NATO.

Spain became the 16th country to join NATO on 30 May 1982. The new member brought a lot to the table as it joined the 33-year-old Alliance – not only its military capabilities and its vital geostrategic location for Western European defence (positioned between the Mediterranean Sea and the Atlantic Ocean), but also its diplomatic skill and political relations with Latin America, the Middle East and North Africa.

Eventually, a Spanish diplomat would serve as NATO Secretary General, guiding the Alliance through its first major peacekeeping operation and its transition from a Cold War organisation to a fully flexible security organisation engaged with new partners and prepared for new threats and challenges.

Read more about Spain’s history in the Alliance on NATO Declassified.

One of the notable decisions taken by NATO Leaders at this summit was to invite the Czech Republic, Hungary and Poland – the 1st post-Cold War member countries – to begin accession talks with NATO.

Check out this blast from the past website for photos and information.

At the Madrid Summit, NATO will adopt its new Strategic Concept.

This key document reaffirms NATO’s values, purpose and tasks. It provides a collective assessment of the security challenges facing the Alliance and outlines the political and military tasks NATO will carry out to address them.

The Strategic Concept is the result of internal consultation among Allies and external engagement with partners, other international organisations, expert communities, youth organisations, civil society and the private sector.

Learn more about the Strategic Concept.