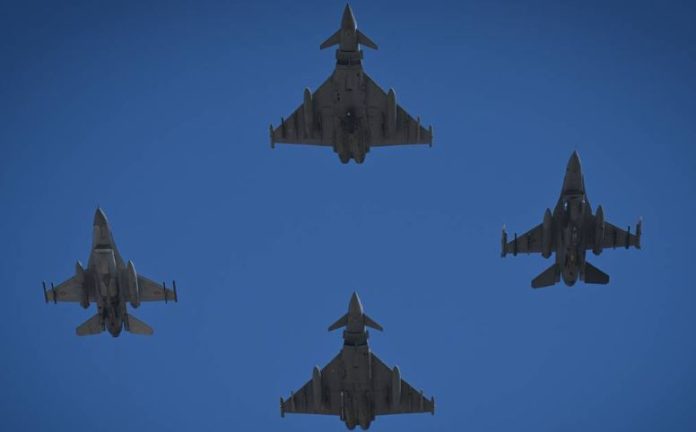 Russia’s invasion of Ukraine is a stark reminder that Europe’s NATO members need to spend more wisely — and not simply spend more — in bolstering their collective defense against unwarranted aggression. Kyiv’s success so far in blunting Moscow’s armed forces provides a pointer as to where at least some of the additional investment and focus should go, not least of all in air and counter-air systems as well as what is sometimes termed combat enablers.

The needs are both near- and medium-to-long term. In the near term, continuing to improve air and missile defense would bolster the conventional deterrence of NATO European members, providing the capacity to better address the threat of short-range ballistic and longer-range cruise missiles.

Both types of systems have been widely used by Russian forces in attacks on Ukraine, if often with patchy success. Still, the existing threat and Russia’s military doctrine are clear. And so better defense against ballistic and cruise missiles would benefit NATO operationally and further bolster the credibility of its conventional deterrence. Critical national infrastructure, otherwise, could become a critical vulnerability.

The importance of being able to degrade an opponent’s ground-based air defense is also underscored by the war in Ukraine. Russian attempts to unpick Ukraine’s surface-to-air missile systems and radar net appear piecemeal, making Russian air operations riskier and limiting its freedom of action.

The suppression or destruction of enemy air defenses is now a growing priority for NATO air forces in any consideration of a confrontation with a peer rival, rather than using, for the most part, air power to support ground forces, as seen in recent counterinsurgency operations.

In the longer term, the importance of command and control has been reinforced by Russia’s war, alongside access to accurate and timely data sourced from air and space assets. If Finland and Sweden become NATO members, the alliance will likely experience an improvement in the quantity and quality of data in regard to Russian dispositions and military activity. But continued investment will be needed from European states to meet capability requirements, especially given the U.S. also has its eye on potential Pacific-based contingencies.

Europe remains dependent on the U.S. to a large degree for this sort of information gathering and coordination. And the same could be said for enablers like air mobility and air tanking assets.

Moreover, the continent will need to recapitalize its fleets of combat aircraft. These future capabilities would likely remain in the local inventory for most of this century.

Europe has already embarked on the development of the next generation of multirole combat aircraft, and it has managed to avoid a repeat of the 1980s, which saw the emergence of three competing projects: the French Rafale; the (West) German, Italian, Spanish and British European Fighter Aircraft (now the Eurofighter Typhoon); and the Swedish JAS 39 Gripen.

There is no European unanimity however, with France, Germany and Spain pursuing the Future Combat Air System, or FCAS, while the U.K., Italy and Sweden are involved in what is dubbed Tempest.

France is the lead on FCAS, with the U.K. taking a similar, if arguably more accommodating position on Tempest. London has also looked beyond its traditional European partner base, with Japan increasingly involved with elements of the Tempest project.

While two rival projects — rather than a single pan-European combat aircraft — can be argued as inefficient, at least they are underway. There continues to be a possibility the two could somehow merge, though the industrial divide between the groups remains wide. There is also a question of how Franco-German politico-industrial relations play out.

Regarding FCAS, it is not without tension. Germany’s selection of the Lockheed Martin-made F-35 to replace the Tornado in its commitment to the NATO nuclear role is unlikely to have been popular in Paris, even though the acquisition is not a genuine threat to German participation in the FCAS program.