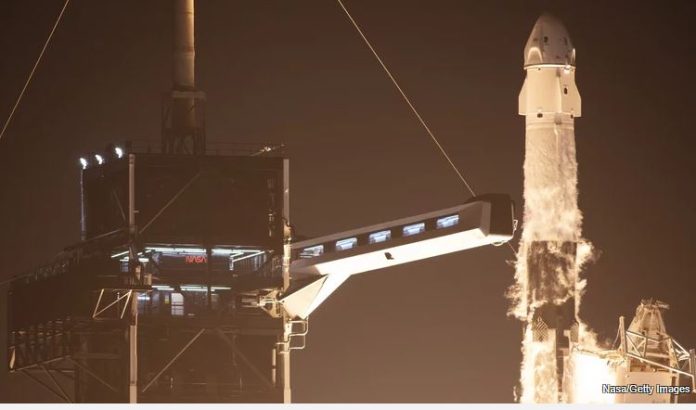 One of the biggest breakthroughs that SpaceX has made over the years concerning space travel was the development of reusable rockets. The company’s Falcon 9 rocket, for instance, is capable of repeat flights — something previous rockets weren’t capable of doing. One-and-done rockets were one of the biggest expenses facing space agencies. The Falcon 9 rocket — as well as others like Blue Origin’s New Shepard rocket and (per Space) Virgin Galactic’s reusable spaceplane, SpaceShipTwo — has helped clear one of the major hurdles facing commercial space travel.

According to CNBC, this technology has turned heads outside of the space travel industry, as others have started to ponder additional applications for reusable rockets. While SpaceX has been using the Falcon 9 rockets to shuttle astronauts and supplies to the International Space Station, the Pentagon has been mulling over the idea that the same rockets could be used to rapidly transport cargo not just out of this world, but around it, too.

THE U.S. AIR FORCE IS KICKING THE TIRES ON ROCKET CARGO

In the United States Air Force’s budget proposal for 2022, $50 million has been set aside for a small experimental program that is being called Rocket Cargo, per CNBC. The program will be led by the U.S. Space Force, which is a branch of the U.S. military that falls under the Department of the Air Force, much the same way the Marine Corps falls under the control of the Department of the Navy.

The program is intended to gauge the logistics of using rockets to transport cargo. This will include learning about launching rockets on so-called “non-traditional surfaces,” loading and unloading cargo, as well as air-dropping cargo, in situations where landing the rocket isn’t an option. Last year, the program got underway with a pair of contracts being given to SpaceX and another commercial space company, Exploration Architecture Corporation, or XArc. The Rocket Cargo program intends to use SpaceX’s currently in development Starship rockets, as they are capable of not just being reused but also launching payloads weighing between 30 and 100 tons.

Transporting cargo would require the use of point-to-point space travel, which is where a spacecraft would launch into space from one location, go into space, but then successfully land in another location somewhere else on earth. The leader of the Rocket Cargo program, Dr. Greg Spanjers, said that Air Force has held discussions with several space travel companies about the possibility of future government contracts as the program progresses.

According to Task and Purpose, members of the military have been keeping a close on SpaceX and have been impressed by what they’ve seen from the space travel start-up led by billionaire businessman Elon Musk. Some military officials have said they wouldn’t mind seeing the Department of Defense use SpaceX as an example of how to run its development process.

Former Air Force chief architect Preston Dunlap noted in his resignation memo that bureaucratic red tape within the Pentagon serves as a stumbling block for innovation (via Air Force Magazine). “By the time the government manages to produce something, it’s too often obsolete; no business would ever survive this way, nor should it,” Dunlap wrote.

There is growing concern among members of the military that the Department of Defense is at risk of falling behind the Chinese People’s Liberation Army, which has taken immense strides in recent years in a wide range of fields, from artificial intelligence and cyber warfare to hypersonic weapons. The criticism is that the military-industrial-congressional complex that has been in place in the United States for decades is outdated and has a hard time keeping up in an age when change happens at a rapid pace.