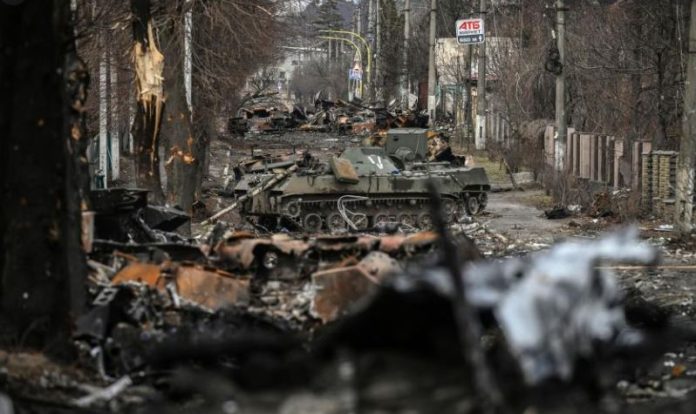 In the last full week of May, Dr Kissinger celebrated his 99th birthday and made remarks about Ukraine’s ceding land to Russia that drew attention—understandably.  The man’s career is unique: he both reached the heights of power and commanded respect as an academic.  His political controversy makes him a natural target for criticism, particularly in the context of the Russo-Ukrainian War.

Nevertheless, Dr Kissinger’s comments must be considered carefully.  Although his premise that failure to end the Ukraine war early would risk a permanent alliance between Russia and China is dubious, a legitimate evaluation of his arguments reveals deeper contradictions within the current situation.  Indeed, Dr Kissinger’s greatest lesson to posterity, as an academic and statesman, is that the statesman’s task is to manage and resolve the contradiction.  The contradictions in the Ukraine War – military, political, and diplomatic – offer a glimpse into the true task of contemporary statesmanship.

First, the Ukraine War, while already geopolitically disruptive, has the potential to trigger knock-on effects of a much greater danger.  Food and energy prices already have spiked because of the war.  Sri Lanka is on the brink of collapse.  North African and the Middle Eastern polities are at risk of a similar situation: the last major regional food crunch sparked the Arab Spring.  Second, attacks on Russian territory would carry nuclear risks.  Russia has flaunted its nuclear capabilities since its pre-invasion build-up began and during the conflict.  An attack on territory deemed Russian, namely Crimea, may give these threats teeth.  Third, Sino-American antagonism remains the overriding issue that will determine Eurasia’s fate.  A Sino-Russian bloc should not be accepted with sanguinity.  If possible, the US should disrupt it.  Thus, fourth, the West should seek a compromise peace with Russia.  Territorially, the situation should revert to 24 February, when Russia had control of Crimea and the Donbas separatist republics, but no other Ukrainian territory.

Each of these premises is reasonable.  The Ukraine War’s continuation carries severe geoeconomic risks, increases the threat of nuclear use, and hardens Russia into an incorrigible Chinese partner.  Moreover, in principle, a return to the status quo ante is not absurd.  Kissinger is not advocating that Ukraine surrender occupied Kherson, Zaporizhzhia, Donetsk, and Luhansk Oblasts to Russia.  He is instead suggesting that Kyiv formalize the status quo ante, accepting Russian control of Crimea.

Ceding Crimea and the Donbas separatist enclaves to Russia, moreover, would not destroy Ukraine.  The country’s primary exports, food, iron, and steel are not from the Donbas, while Ukraine has major metallurgical facilities in Kryvyi Rih, Nikopol, and Dnipro.  Sevastopol is a major port, and Russian control of Crimea indeed jeopardized Kerch Strait trade between Mariupol and Berdyansk.  However, Ukraine’s southwestern ports – Kherson, Mykolaiv, Odesa, Skadovsk, and Izmail – compensated for this before the Russian invasion.  Ukraine can survive economically without Crimea and part of the Donbas, just as it has survived since 2014. If an economic agreement with the EU is reached and if Ukraine legitimately can crack down on corruption, the country will become wealthier.  And lest the distasteful reality be forgotten, regardless of international legal recognition, Crimea has been Russian territory since its conquest in 2014.  As Ukrainians clearly understand today, what one controls is what one can hold.

The issue with Kissinger’s proposal does not lie, therefore, in the political-economic realm.  There is, rather, a temporal contradiction between his proposed timeline and the military realities.

Dr Kissinger is correct to identify summer as the most viable time for negotiations.  If the war drags on into the winter, Russian combat attrition will prompt mobilization.  Russia already has declared general mobilization in the Donbas, conscripting every able-bodied male.  Some now refuse to fight.  Russia may conscript men in occupied Kherson and Zaporizhzhia Oblasts, which could backfire depending upon the insurgent organization.  It will seek more mercenaries to fill out its ranks.  But at a certain point, it will need to send European Russians to fight. And there, they will die.

European Russians will accept casualties if they bring victory. Although it falls short of Russia’s initial political objectives, the Kremlin will have won if it controls the Donbas and southern Ukraine after a ceasefire, especially if a peace agreement involves a demilitarized Ukraine. In this case, Ukraine will be at Russia’s economic and strategic mercy.

The status quo ante, by contrast, would be a defeat for the Kremlin, one suffered at the cost of much blood, but also the only settlement that guarantees Ukrainian survival. Given these stakes, Western sanctions relief will not persuade Russia to withdraw from Ukraine’s south or give up its gains in the Donbas. The status quo ante that Dr Kissinger proposes is untenable. It would require Putin to give up the land in Ukraine’s south gained at high cost unless a Ukrainian counteroffensive reverses Russian gains.

The Ukrainian military will have the ability to counterattack at scale by summer or early fall.  Kyiv now has 700,000 men under arms – by comparison, pre-war Ukraine had 900,000 reservists indicating that it retains significant untapped combat capacity.  Once new Ukrainian formations are trained and equipped, particularly with high-quality Western systems, the Ukrainian high command, which has shown considerable operational-strategic skill, can stage a multi-axis counteroffensive to liberate the occupied south.

Yet in the short-term, Russia retains advantages.  Ukrainian operational skill has spoiled Russia’s Donbas offensive.  But Russia has nearly completed its envelopment of Ukrainian forces in Severodonetsk and may drive Ukraine back to Slovyansk.  Russian capacity limits make further breakthroughs unlikely.  Nevertheless, after securing Severodonetsk – a task that Russia may complete in the foreseeable future – the Kremlin will press for a ceasefire, rebuild its forces, and seek sanctions relief, all the while holding southern Ukraine.

A Ukrainian counteroffensive, if successful, will harden Russia’s position.  If Putin sued for peace after a string of Ukrainian victories, he would place himself in the same position as Boris Yeltsin in 1997.  Weak, isolated, and despised by the Russian public, he would be vulnerable to a palace coup by a stronger silovik.  Russia’s other satellites could capitalize.  Its non-European federal subjects could assert autonomy against a weakened Moscow, and its Central Asia clients could turn fully to China, threatening the Russian state’s survival.

A new leader, moreover, will not solve this issue.  More likely than not he will be another silovik or be forced to work with the siloviki to maintain power.  Even if this leader genuinely wished to end the war, a policy reversal would take years.  Gorbachev opposed the Soviet-Afghan War from its inception.  It took him four years to end it.

Dr Kissinger’s broader point – that Russia must be considered a potential ally in the struggle against China – is also worth considering.  In the abstract, Russo-American triangulation against China would replicate Sino-American triangulation against the USSR.   But it should be recalled that Kissinger’s masterstroke, the Sino-American entente stemmed from the Sino-Soviet split that existed independent of Nixonian-Kissingerian diplomacy.  Offering the Kremlin pre-emptive concessions will do little to break it from the Zhongnanhai.  Why would Russia, offered a dismembered, weak Ukraine, consider joining the Western camp?  Putin simply would press on, absorbing Ukraine later, and resurrecting a Greater Russia including Belarus, Ukraine, likely Moldova, Georgia, and perhaps Armenia and Azerbaijan, to confront the West.  A Russo-Chinese split is likely at some point.  Yet accommodation toward Russia will not induce a policy reversal.  At best, we must be watchful and capitalize on contingent opportunities.

What, then, is to be done?  The Western powers should prepare Kyiv for a peace settlement, one that may include the cession of Crimea and part of the Donbas.

The core issue for Ukraine is not territorial, but political-military.  Post-war Ukraine may be independent of alliances.  But it must be able to develop and field all conventional weapons of its choosing, including UCAVs, heavy artillery, and long-range missiles.  It must also be able to maintain a large conscript army, akin to the IDF, that can repel future Russian invasions.  Any peace deal limiting this should be rejected.  But territorial revisions, if they leave Ukraine with the strategic depth it requires to fight another war, should not be dismissed out of hand.  Hence a reasonable goal for Kyiv may be its pre-24 February borders.

Obtaining these orders will take months, perhaps years, of combat before Russia is bloodied enough to accept Ukrainian independence.  Force must resolve the contradiction toward which Kissinger points.  The West, to secure its interests, ought to support Ukraine in this open-ended confrontation.  The task of Western statesmen, then, is continuously to deter Russia from pre-emptive escalation, to provide Ukraine with all the weapons it needs to defeat Russia militarily and to assist Kyiv in securing its military position at the negotiating table.