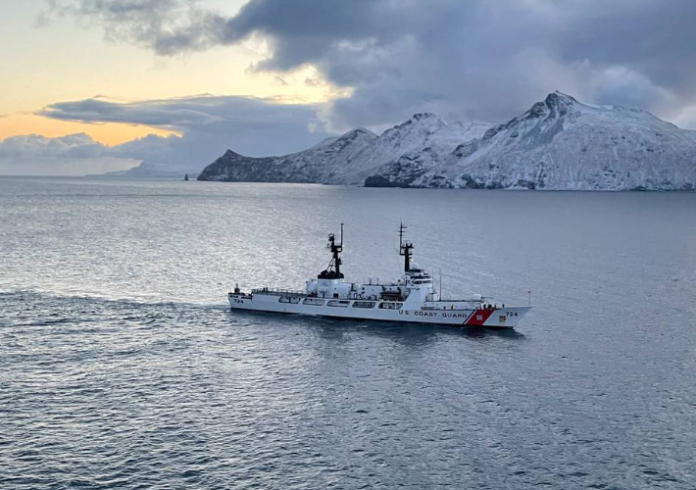 Winter is coming early this year in the Arctic. Last month, a Chinese and Russian joint surface action group came within 75 nautical miles of Kiska Island, Alaska. In response, the Coast Guard mobilized a patrol to monitor the ships as they approached American home waters. A year prior, several Chinese warships had entered the U.S. exclusive economic zone off Alaska.

These repeated tests of American resolve so close to our shores should set off alarm bells in Washington. Our two greatest adversaries, China and Russia, are now cooperating on the high seas to challenge our presence in the region.

Chinese and Russian attempts to gain superiority in the Arctic are not new. In 2015, five Chinese vessels marked President Barack Obama’s visit to the Bering Sea with battle drills off the Alaskan coast. Russia has long maintained a strong military presence in the Arctic, even after the end of the Cold War.

What is different now, however, is that our rivals’ power projection in the polar regions is outpacing our own. As a self-described “near-Arctic power,” China has been working to build a “Polar Silk Road” of economic and military infrastructure across the Arctic. Meanwhile, Russia is developing its already-formidable capabilities to disrupt freedom of navigation and U.S. operations.

If China and Russia reach their goals, the Arctic will emerge as a central theater in our respective competitions. Alaska is a vital location for monitoring Chinese and Russian missile forces. The Arctic’s natural characteristics also make it ripe for space launch, reconnaissance, and energy resource capture. Losing the upper hand in the Arctic could result in our exclusion from the region militarily and economically — an ominous prospect, given the trajectory of American relations with Russia and China.

Icebreakers are imperative to the national security of the United States and its Arctic territories.

By Julia Nesheiwat and Andro Mathewson

The United States has already been caught flat-footed, as we have invested relatively little in our Arctic forces. For example, the combined icebreaker fleets of our adversaries outpace ours by more than 25 to 1.

U.S. leaders simply have not met the Arctic challenge, and we are only beginning to confront this reality now. In recent months, the Biden Administration has created new posts at the Pentagon and State Department to address Arctic security. And more recently, the White House rolled out a comprehensive political-military strategy for the Arctic, which includes a call for a greater military presence in the region.

Our core challenge, however, is that the U.S. defense industrial base will essentially be starting from scratch to field these capabilities. Decades of low investment in icebreakers from the federal government has left U.S. shipbuilders unprepared to service even the best defense strategy. Today, only one shipyard in the United States is building polar icebreakers, and we are set to add just three of these crucial ships by 2030. Without sustained investment in these capabilities, there is little hope of maintaining long-term U.S. power in the region.

Congress has worked to authorize funding for a twelfth national security cutter in this year’s defense bill, but much more needs to be done. We need to expand the icebreaker program and substantially increase the budget for U.S. Northern Command, which would give planners the tools they need to navigate this unstable strategic environment.

Russia and China’s latest target, Kiska Island, became known during World War II as one of few U.S. territories ever to be occupied by a foreign nation. Japanese control of the island came to an end in 1943 when Adm. Chester W. Nimitz and his cruisers expelled the Japanese. Since then, U.S. forces have continued a proud tradition of Arctic operations, including the first deployment of a nuclear submarine in 1954.

It appears Kiska — and indeed the United States — is once again coming under threat from a Pacific power. The moment demands that we unleash the full might of our defense industrial base to secure our foothold in the Arctic. As the proverbial winter with China and Russia comes, we should prepare ourselves to weather it.

Sen. Roger Wicker, R-Miss., is the ranking member of the Senate Committee on Commerce, Science, and Transportation. He also serves on the Senate Armed Services Committee.