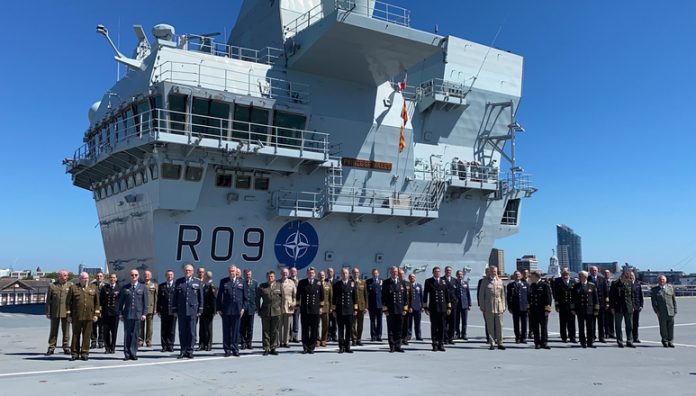 On 7-8 July 2022, the NATO Military Committee travelled to the United Kingdom to attend a series of maritime-related discussions hosted by the NATO Maritime Command. Aboard the HMS Prince of Wales, the NATO Military Representatives received briefings from the UK Strategic Command on Multi-Domain Operations and the Future Commando Force.

Arriving in Portsmouth, the NATO Military Representatives were invited aboard the HMS Prince of Wales, who hosted the two-day programme. The British aircraft carrier, only recently returned from Spain, was involved in her role as the command ship of the NATO’s Response Force and took part in the premier Spanish naval exercises off the Atlantic coast, boosting security and NATO allies’ ability to operate together in the region.

Starting the programme organised by Vice-Admiral Blount, Commander of NATO’s Maritime Command, the NATO Military Committee and its Chair, Admiral Bauer, settled into a series of discussions focused on maritime-related topics, including the threats and challenges in the maritime domain, the risks and opportunities of maritime warfare, as well as specific outcomes from the Madrid Summit and how they would relate to NATO’s maritime strategy. “NATO’S maritime thinking has always been based around three pillars – the maritime contribution to collective defence, co-operative security, and crisis management. But we need to ensure that we are able to counter these threats and challenges on their own playing field. The decisions from the Summit will enable us to build on existing measures and further strengthen our overall Deterrence and Defence Posture”, highlighted Admiral Bauer.

The second day was hosted by the UK Royal Navy Fleet Commander, Vice Admiral Burns and started with a presentation by General James Hockenfull, Commander of the UK Strategic Command, on Multi-Domain Operations (MDO), including ways to train, develop technologies and innovative tools to be used in MDO. The NATO Military Committee were also updated on the Future Commando Force. “The Future Commando Force concept allows for more autonomy, with the skill set of personnel being tailored to each mission. High readiness teams ready to deploy for a mission at a moment’s notice. Highly interoperable, interchangeable and flexible.  It’s simple math – if our Allies are stronger and more capable then our Alliance is stronger and more capable. Which in turns translates to stronger and better deterrence and defence for the Alliance”, concluded the Chair.