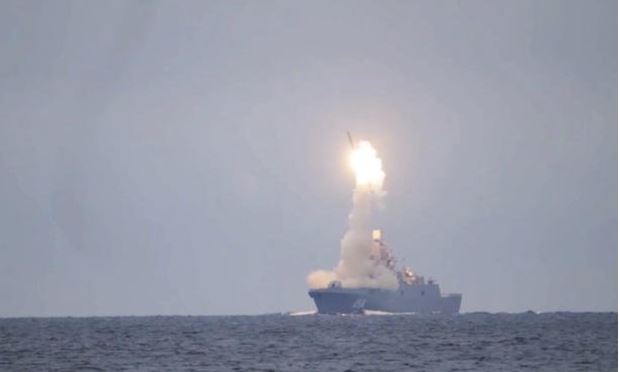 Russia’s defense ministry claimed its military used hypersonic missiles against an underground ammunition warehouse as well as a fuel depot during the country’s fighting in Ukraine last weekend, reportedly marking the first-ever use of the new type of weapon in combat.

Hypersonic missiles, which can travel five times the speed of sound, making them harder to track, trace and destroy before hitting a target, have inspired worry among U.S. officials and defense industry experts for years as some assess that adversaries like China and Russia outpace America in developing their own hypersonics.

Those warnings have been a constant drumbeat in recent years, part of annual arguments over the defense budget as well as Pentagon officials’ cases to reorient the military away from counter-insurgency combat and toward potential competition with major world powers.

Despite those past arguments, senior leaders are downplaying the significance of the alleged Russian missile launches in Ukraine, claiming they can’t confirm Russia’s claims of their use and saying that even if they had been deployed, they’d likely have little impact and shouldn’t be a concern for the U.S. military.

During an appearance on CBS’ Sunday talk show “Face the Nation,” Defense Secretary Lloyd Austin said the reported use of a hypersonic missile by Russian President Vladimir Putin’s military is likely a distraction tactic to grow fear in the international community.

“I would not see it as a game-changer,” Austin told CBS. “I think the reason he is resorting to using these types of weapons is that he is trying to reestablish some momentum. And again, we’ve seen him attack towns and cities and civilians outright, (and) we expect to see that continue.”

The Russian military says it used its latest hypersonic missile, Kinzhal, for the first time in combat during its offensive in Ukraine. (Russian Ministry of Defense via Associated Press)

“Look, we’ve seen the Russian claim that they used a hypersonic missile,” Kirby told reporters. “We’re not in a position to refute that claim, but we’re also not able to independently verify it.”

Air Vice-Marshal Michael John Smeath of the United Kingdom’s Royal Air Force said if the missiles were launched by Russia, they were likely a Kinzhal, a hypersonic unveiled by Putin in 2018.

Smeath mirrored Austin’s sentiments that the missile’s alleged use is more likely a move to inspire confidence in Russia’s military as it faces a stalled invasion in Ukraine, highlighted by numerous pitfalls that have led to doubts as to whether Russia’s force should be regarded as a near-peer to the world’s powers.

“Russian claims of having used the developmental Kinzhal is highly likely intended to detract from a lack of progress in Russia’s ground campaign,” Smeath said in a UK Ministry of Defence press release. “Deployment of Kinzhal is highly unlikely to materially affect the outcome of Russia’s campaign in Ukraine.”

Tactically, using hypersonic missiles — some of which have nuclear-carrying capabilities and can be fired from very far distances at sound-shattering speed — has nearly the same effect on a ground target as conventional bombs, making the use of the prohibitively expensive weapons surprising.

Dave Deptula, a retired Air Force lieutenant general and dean of the nonprofit Mitchell Institute for Aerospace Studies told Military.com that the alleged use of the hypersonics should cause little concern for Ukraine or the United States.

“A missile is a missile, and the Russians shot nearly one thousand of them at Ukraine,” Deptula said. “It is not significant that the missile that he [Putin] launches flies over Mach 5 or not. So, it is a bit peculiar why he’s doing this, given these are extraordinarily expensive missiles.”

A senior U.S. defense official, who spoke to reporters on condition of anonymity, speculated Russia may even be running low on other missiles, and tapped into their hypersonics for those strikes in Ukraine.

The Pentagon has worked to address the U.S.’s hypersonic research in recent months, noting that it has been trailing behind adversaries such as Russia and China.

Last month, Austin met with the CEOs of about a dozen defense companies to talk about the U.S. hypersonic efforts ahead of the 2023 budget proposals and as tensions between Russia and Ukraine began mounting.

So far, the U.S. has faced headwinds to developing its own weapon. The Air Force didn’t complete three tests last year of the AGM-183, a hypersonic missile being created by Lockheed Martin, and dropped the hopes of fielding a weapon this year.

The 2022 National Defense Authorization Act allocated $2.5 billion for the U.S.’s hypersonic weapon programs and heavily boosted funding for the Navy’s research and development.