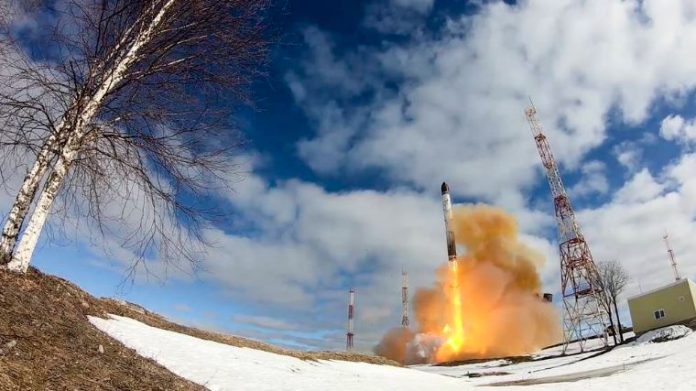 Russia’s Defence Ministry announced the Sarmat “was successfully test-launched from a silo at the Plesetsk state testing cosmodrome” in northwestern Russia. The test “confirmed” the missile’s “design characteristics” during “all phases of its flight,” the ministry declared, adding that its “practice warheads arrived at the designated area at the Kura proving ground on the Kamchatka Peninsula.”

Although Russia has conducted three Sarmat ejection tests since December 2017, this latest test was the missile’s first flight test.

The Sarmat is a three-stage, silo-based, liquid-fuel, heavy ICBM with a reported range of 18,000 kilometers. Dubbed “Satan II” by NATO, the missile is a Russian-built replacement of the Soviet-era SS-18 “Satan” ICBM, which is reaching the end of its life cycle. The Sarmat reportedly can carry a 10-ton payload consisting of 10-plus multiple independent reentry vehicles along with penetration aids used to evade missile defenses. Moscow says the new missile can also carry several Avangard hypersonic glide vehicles.

In early February, executives from more than a dozen defense firms gathered virtually with top Pentagon leaders, including the defense secretary. At stake: the future of hypersonic weapons, one of the most hyped, debated and costly weapons initiatives in years.

Missiles are often their most vulnerable during the boost phase, and most American missile sensors normally focus on threats traveling over the North Pole rather than the South Pole. Regardless, existing U.S. missile defense capabilities are focused on rogue states such as North Korea and stand no chance of defending against a massive Russian nuclear attack against the American homeland, reinforcing the need for a robust and reliable U.S. nuclear deterrent.

Moscow claims serial production of the Sarmat will commence this fall, and that the missile will begin combat duty with Russia’s 62nd Missile Division in Uzhur, Krasnoyarsk Krai, before year’s end, although that timeline is likely unrealistic.

The test itself was “routine” and “not a surprise,” as Pentagon press secretary John Kirby noted. Indeed, Sarmat’s flight tests have been delayed for years, making this test long overdue. That, however, did not stop Putin from calling the test a “momentous event,” vowing the missile “will be a wakeup call for those who are trying to threaten” Russia.

That provocative language follows several instances of nuclear saber-rattling by Putin both before and after Russia launched its unprovoked invasion of Ukraine.

Putin’s behavior stands in stark contrast with the Biden administration’s decision to postpone and then cancel a March 3 launch of an unarmed Minuteman III ICBM. The administration had already notified Russia and provided notification for civilian air traffic. Kirby attempted to justify the postponement as an effort to ensure U.S. actions were not “misunderstood or misconstrued,” saying the decision demonstrated Washington is “a responsible nuclear power.”

Putin, however, may interpret such concessions by Washington as weakness and an indication that his nuclear saber-rattling is working.

Asked about the Minuteman III test during a March hearing before the Senate Armed Services Committee, Adm. Charles Richard, commander of U.S. Strategic Command, recommended: “that we maintain our normal set of operations.” Richard emphasized he needs these tests to “maintain confidence and reliability” in the 50-year-old Minuteman III, which faces growing reliability concerns as it nears the end of its service life. Another test is slated for later this year, which the administration should conduct as planned. That will remind Putin that the United States has the means to respond to a nuclear attack.

More broadly, the Sarmat test — not to mention China’s rapid nuclear expansion — underscores the need to modernize America’s own nuclear triad, including by urgently replacing the Minuteman III with the Ground-Based Strategic Deterrent, otherwise known as the LGM-35A Sentinel.

As Global Strike Command’s then-chief warned last year, Washington has “no margin-left” to delay the replacement of the Minuteman III, which entered service in 1970. Its service life was originally meant to last just 10 years but has been repeatedly extended. A further extension would not only be cost-inefficient but would risk eroding the reliability and credibility of the land-based leg of the triad.

Fortunately, the Biden administration’s fiscal 2023 budget request included $3.6 billion for the Ground-Based Strategic Deterrent program. The administration’s forthcoming Nuclear Posture Review should similarly endorse the GBSD. Congress, for its part, should provide all necessary funding to ensure the GBSD’s on-time delivery by 2029.

ICBMs represent a vital component of America’s nuclear deterrent. They are the most responsive leg thanks to their high state of readiness, while their geographic dispersion complicates adversary targeting, forcing Russia or China to expend a mass number of nuclear-tipped missiles rather than simply concentrating on a few U.S. command centers, submarine ports and bomber bases. ICBMs also provide a hedge against any potential advancements in anti-submarine warfare that could threaten the survivability of the sea-based leg. Those characteristics of a modernized ICBM leg of the nuclear triad help deter adversaries from launching a nuclear attack in the first place, preventing nuclear war and making Americans safer.