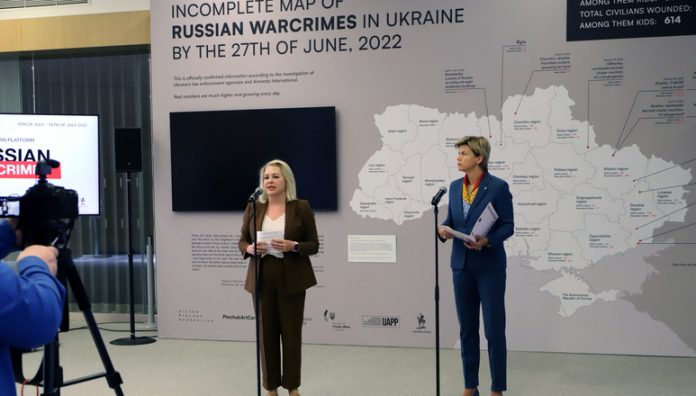 Ambassador Braže reiterated NATO’s commitment in the Madrid Summit declaration to work with relevant stakeholders to hold all those responsible for war crimes accountable. Speaking in Ukrainian, Ambassador Braže said: “We stand in full solidarity with Ukraine, and we are determined to do all we can to support you. Your courage is an inspiration.”

The Russian War Crimes House exhibition consists of photos and a video depicting Russian atrocities in Ukraine. It will be on display at the NATO headquarters from 6 to 15 July. The exhibition was previously shown in Davos during the World Economic Forum in May 2022. It is organised by the Victor Pinchuk Foundation.

Today’s opening ceremony was hosted by Ambassador Nataliia Galibarenko, the Head of the Mission of Ukraine to NATO. The Mayor of Melitopol, Ivan Fedorov, who was himself abducted in March for several days by the Russian forces, spoke in person of the destruction of Ukrainian lives, livelihoods and cities by the Russian invasion. The Head of the Office of the President of Ukraine, Andrii Yermak, and the Ambassador-at-large at the Ministry of Foreign Affairs of Ukraine, Anton Korynevych, addressed the audience remotely.

This week marks the 25th anniversary of the Charter on a Distinctive Partnership between NATO and Ukraine, which established the NATO-Ukraine Commission providing the framework for our cooperation. Since Russia’s illegal annexation of Crimea in 2014, NATO Allies have equipped and trained tens of thousands of Ukrainian soldiers. Following Russia’s invasion earlier this year, Allies have stepped up with billions of dollars of weapons and other assistance to help Ukraine uphold its right to self-defence and prevail against Russian aggression.