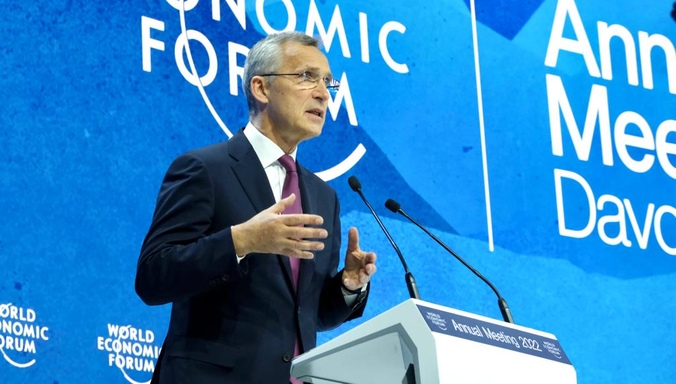 An important lesson from Russia’s war against Ukraine is that the West should not trade long-term security needs for short-term economic interests, Mr Stoltenberg said. He stressed that the war demonstrates how economic relations with authoritarian regimes – such as Russia and China – can create vulnerabilities, including on energy. The Secretary General also warned of the risks created by exporting advanced technologies like Artificial Intelligence, and of foreign control over critical infrastructure, like 5G.

Mr Stoltenberg described Russia’s war against Ukraine as a “game-changer” for the global order, stressing that NATO’s role is to avoid the conflict from spreading while continuing to help Ukraine defend itself. He made clear NATO would defend “every inch of NATO territory”, as demonstrated by major reinforcements to the Alliance’s collective deterrence and defence, including 100,000 troops now on high alert.

Finland and Sweden’s decision to seek NATO membership demonstrates that “European security will not be dictated by violence and intimidation”, Mr Stoltenberg added. He stressed that NATO enlargement has been a historic success and has spread freedom and democracy across Europe.

While in Switzerland, the Secretary General also met with Swiss Federal Councillor Viola Amherd, Head of the Federal Department of Defence, Civil Protection and Sports, and he thanked the minister for Switzerland’s substantial contribution to NATO’s KFOR mission in Kosovo. He also met with Professor Klaus Schwab, Founder and Executive Chairman of the World Economic Forum.

The Secretary General later participated in a panel titled “Securing Europe”, and described how, in the context of the Ukraine crisis, NATO has two tasks: to “support Ukraine […] but then at the same time stepping up deterrence and defence to ensure no escalation of the conflict”. He was joined in this panel by Prime Minister Alexander de Croo of Belgium, President Stevo Pendarovski of North Macedonia, Defence Minister Kajsa Ollongren of the Netherlands, Head of the Presidential Administration of Ukraine Andriy Yermak, and Bloomberg Television’s Francine Lacqua.