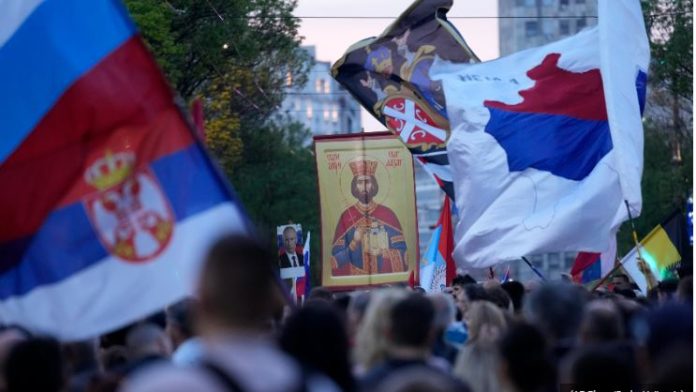 Vladimir Putin’s war in Ukraine is on the verge of a stalemate. Fighting will continue over the summer, but Putin and the Kremlin need months to reconsolidate forces, plan another operation, and open a new offensive in the late fall or early winter. In the interim, Russia can be counted on to pressure the U.S. and its allies elsewhere. The Balkans is an obvious target: indeed, Russia is in the process of sparking another Balkan conflict. The U.S. and its allies should act decisively to prevent a strategic distraction.

On Monday 16 May, bomb threats gripped the Serbian capital, Belgrade, with panic. Over one hundred schools received threats in the early morning, leading to the cancellation of classes and disruption of daily commutes. The Beograđanka, a skyscraper symbolic of Serbia’s Yugoslav past, was also evacuated, along with the offices of the Beta News Agency.

Serbian authorities immediately linked these bomb threats to Russia. Not, of course, to Russian harassment. Rather, the Serbian government has argued that its support for Russia has sparked these threats. Indeed, Serbia has been reliably pro-Russian since the Kremlin’s invasion of Ukraine began on 24 February—as well as centuries earlier. It has refused to impose sanctions on Russia, and continuously opposed a tougher diplomatic or economic line against the Kremlin. In recent weeks, Serbia’s pro-government tabloids have become mildly critical of the Russian invasion, a far cry from the headlines on 24 February, including “Ukraine Attacks Russia” and “Putin Checkmates Ukraine”. Pro-Russian rallies have also declined. Nevertheless, Belgrade remains reliably Russophilic, as does the Serbian population.

The 16 May bomb scare is not the only bomb threat Serbia has experienced. Air Serbia, the nation’s flag carrier, has received a string of bomb threats over the past months. The threats targeted flights from Belgrade to Moscow. In neither the more recent nor previous cases has Belgrade identified a perpetrator? It has, nevertheless, implied that the bomb threats have come from multiple locations throughout Europe. By implication, the nefarious supporters of the Ukro-Nazi-CIA regime in Kyiv hope to cow a proud Serbia, bullying it into submission.

Serbia, of course, has an acrimonious relationship with its neighbors because of its actions under the leadership of charged war criminal Slobodan Milosevic. Kosovo, which declared independence from Serbia in 2008 on ethnic and historical grounds, is Serbia’s most persistent ideological foe. Kosovo is small and weak, sustained only by international goodwill and the deployment of the Kosovo Force, a NATO-led peacekeeping mission. Progress was made in the last half-decade, in no small part because the U.S., under the previous administration, facilitated an economic agreement between the two polities. However, Serbia is still a cauldron of irredentist ambition.

It is also a country thoroughly penetrated by Russian propaganda. Putin has leveraged Serbian historical animosity towards NATO for his own benefit. Russia, Moscow’s propaganda organs argue, has received the same treatment as Serbia in the 1990s. In the Kremlin’s telling, NATO is two steps away from bombing Moscow as it did Belgrade in 1999.

The Serbian government’s relationship with Putin has benefits in the context of the Kosovo question. In 2008, the Serbian multinational oil and gas company NIS was sold to Russia’s Gazprom. The Serbian government now controls around 30% of its shares, while Gazprom directly and through subsidiaries controls 55%. In return, Russia committed itself to preventing Kosovo’s independence through its political position on the UN Security Council. Russia has kept its word. But Serbia is now overwhelmingly dependent upon Russian energy, and its economy is now dependent upon Russia’s more generally – Russia is Serbia’s fifth-largest export partner by share and its second-largest import partner.

Given Serbia’s dependence upon Russia, it is natural that the country would side tacitly with Moscow. If diplomatic lip-service were the extent of the relationship, this could be tolerated. However, the issue runs deeper.

On 12 May, Kosovo officially filed its bid to join the Council of Europe. It is the only European state apart from Belarus to have not joined the human rights and democracy-promotion organization. Days before, Serbian President Aleksandar Vucic threatened a “strong and serious” response to Kosovo’s Council of Europe bid. Kosovo also applied for the Partnership for Peace, the first of several steps to joining NATO, on the same day.

As of this writing, Serbia’s diplomatic tough talk has come to naught. However, the very fact that it threatened its smaller, weaker neighbor deserves a hard look from the U.S. and its allies.

Serbia is not the primary instigator in this case. Continuous diplomatic-political disputes could be managed if a major ground war was not underway under 600 miles to the northeast.  However, these events should be seen from Russia’s perspective to understand their implications.

Russia’s war in Ukraine has sputtered from the start. The Russian Armed Forces have taken severe combat damage. Partial or even full mobilization will take months to deliver new combat units. Ukraine, meanwhile, is conducting a counteroffensive that could jeopardize Russia’s position in the Donbas. All signs point to a protracted struggle, in which Russia seeks a ceasefire to reconstitute, improve its defenses, and bring up more soldiers. Over time, Russia’s control of Ukraine’s major ports, combined with the Russian Black Sea Fleet, can squeeze the Ukrainian economy. If Putin commits to an open-ended confrontation – which his 9 May speech effectively did, despite its lack of interpretation in the West – he may still swallow Ukraine over time.

However, Russia does need time – time to reconstitute, reassess, and repair its Army’s battered units and morale. An ancillary contingency, sparked by a proxy or friendly European power, would split NATO and EU attention, giving Russia the breathing room, it requires to reset.

It is here that Serbia gains its importance. A Kosovo crisis, particularly a militarised one, would demand European attention, and NATO and American attention is given NATO’s Kosovo mission (KFOR’s) presence and the Balkans’ fraught history.  Even a crisis of only a few months, in which Serbia never actually used military force, would give the Russians enough time to prepare for another offensive from an improved geographic position.

NATO must pre-empt this crisis before it begins.  Serbia should not be treated as an enemy.  Nor should the U.S. and its allies deploy military forces.  Rather, Serbia should be given a stark choice.  Repossess NIS from Russia, regain energy independence, and control Russian disinformation within the country, or risk a punishing sanctions package and informational disruption in the event of escalation.

A war rages on Europe’s eastern flank. The last event needed is a Russian caper in the Balkans.