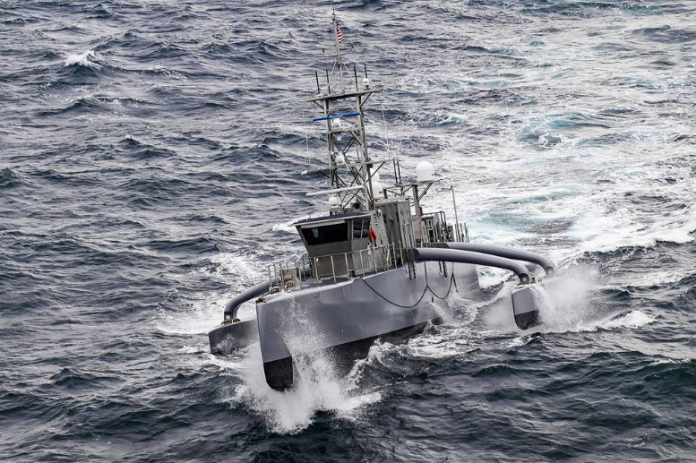 Like “self-driving” cars, autonomous ships are a reality and will likely revolutionize many aspects of shipping and maritime security.

With up to 95% of maritime accidents due to human error, autonomous vessels offer the tantalizing possibility of greatly reduced risk to ship owners, as well as significant cost efficiencies from reduced wage costs, estimated at 30%, and greater fuel efficiency.

Navies are also seeing the significant benefits in terms of cost efficiencies, increased operational capacities and reduced risk to human sailors. The computer-based technology will necessarily entail an even greater reliance on algorithms, data, sensors and linked devices, which will create a host of new cyber vulnerabilities.

In a paper developed in the framework of a research project funded by the European Union’s Horizon 2020 Marie Curie fellowship, we examine the myriad legal and policy implications of autonomous vessels in international shipping.

One of the initial findings to come out of the research, however, relates not to security or tech or law, but to gender. As an institution dedicated to overcoming gender bias, the EU seeks for all its researchers to be aware of gender issues in their research, and to take steps to ensure gender-sensitive methods and outcomes.

Why is ‘unmanned’ so entrenched?

A majority of literature in this field from all sources — whether academic, governmental or other — tend to use the gender-biased terms “manned” and “unmanned.”

As one article succinctly points out: “It may be that the 19th-century sailing vessel was a male-dominated and defined world, yet women are assuredly part of this rich history.” And it is rapidly increasing.

In the U.S. Navy, women represent 19% of officers and 20% of enlisted personnel, and they serve in every rank from seaman to admiral, and in every job from naval aviator to the deep-sea diver. In a similar vein, in 2019 women were approximately 10% of the British Royal Navy’s workforce, and in that year the Royal Navy was named as one of the U.K.’s top employers for women.

The data demonstrate that existing simplistic assumptions and social stereotypes such as “men at sea and women on land” are no longer sustainable, and such single-dimensional, gendered approaches that only men can be expected to crew a seagoing vessel do not reflect the reality. In this framework, and in line with the United Nation’s sustainable development goal No. 5 for gender equality, to recognize the contributions and achievements of non-men in this historically male-dominated sector, this article submits that the gender-neutral terms “uncrewed,” “crewless” and “autonomous” ought to be preferred in publications, whether from media, academia, government or nongovernmental organizations.

Is ‘autonomous’ the same as ‘uncrewed’?

It is important to note that “autonomous” and “uncrewed” are not equivalent terms. A vessel may be uncrewed but not autonomous, for example, if it is remotely controlled. The International Maritime Organization’s “four degrees of autonomy” framework reflects this distinction where a “Degree Three” ship is remotely controlled from another location with no seafarers onboard; whereas a “Degree Four” ship is fully autonomous and “the operating system of the ship is able to make decisions and determine actions by itself.”

Usage of the gender-neutral term “uncrewed” is emerging in some recent literature; for example, the U.S. Government Accountability Office report to Congress titled “Uncrewed Maritime Systems: Navy Should Improve Its Approach to Maximize Early Investments.” While the IMO’s regulatory scoping exercise adopted and predominantly used the neutral term “Maritime Autonomous Surface Ships,” the term “unmanned” still appears several times in the report. This development in the usage of gender-neutral terminology is promising and should be replicated by other governmental agencies and commentaries as well as in other fields such as aviation and space.

The issue of gender-biased language is something that the land-based terminology in this field appears to have avoided to a large extent — we do not talk about “unmanned cars,” for example. In the field of aviation, the term “drone” has been commonly adopted, and it has been used in some commentary in the maritime context.

The gender-biased terms “unmanned aerial vehicle” and “unmanned aerial system” are also used. In the realm of space travel, since the early 21st century NASA has “used and prescribed non-gender-specific terms, preferring such descriptors as human, piloted, and crewed for the former, and unpiloted and uncrewed for the latter.” Despite this conscious shift in terminology by the world-leading U.S. space agency, gender-biased terms are still frequently seen in commentary: for example, “manned space missions.”

One reason for the continued use of this archaic terminology is embedded in legal instruments such as the United Nations Convention for the Law of the Sea. For example, Article 29 defines warships as vessels that are “manned by a crew which is under regular armed forces discipline.” This gendered terminology goes beyond just the seagoing crews; UNCLOS articles 62 and 119 refer to fishermen only, excluding the contribution of thousands of women to the fishing sector worldwide.

This is not to imply that the titanic task of updating the UNCLOS should be undertaken with the primary focus on updating the terminology into a more gender-neutral one. Instead, it suggests that the long-standing, ongoing debate surrounding the vital need to update UNCLOS to meet more contemporary needs and challenges, such as outdated definitions, technological advancements, etc., should consider including the update on its gendered terminology in the discussion agenda as well.

And while gender-biased terminology like this in international law ought to be amended, until it actually happens, it should not create an obstacle to others to update terminology in their discussions, commentaries, and reports.

This article was developed as part of the project titled “Hybrid threats to Indonesia’s Maritime Security — an assessment of cyber and cyber-physical vulnerabilities in the world’s busiest shipping lanes,” and received funding from the European Union’s Horizon 2020 research and innovation program under the Marie Skłodowska-Curie grant agreement No. 101029232.

Adam Fenton is a Marie Curie research fellow at Coventry University’s Centre for Trust, Peace and Social Relations. Ioannis Chapsos is the research lead in maritime security at the center.