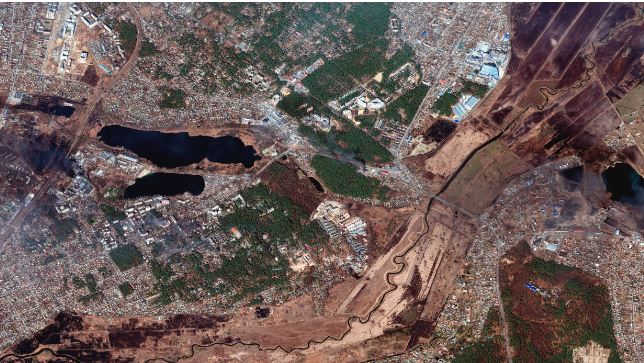 The volume of information and video footage – both from perspectives on the ground and from high in the sky – coming out of the war in Ukraine is simply astounding. Certainly, the world has been exposed to detailed and wrenching combat footage – live and near-live – in wars past, starting really in Vietnam, leaping into real-time in Operation Desert Storm in 1991, and becoming more intimate with every conflict since the September 11th terrorist attacks. But the bird’s eye view into combat has never been like this.

We are constantly updated on the war’s developments, hour-by-hour, if not minute-by-minute, in the news and via social media. Cell phone videos of Russian jets screaming over neighborhoods are instantaneously uploaded to the internet. We regularly receive drone camera footage of Ukrainian counter-attacks on Russian tank columns. And high-resolution satellite photos from private-sector satellite systems showing important tactical changes on the battlefield – such as Maxar Technologies’ imagery showing the dispersing Russian vehicle column north of Kyiv – are likely helping government agencies assess the situation as it changes. All that said, while we all marvel at the detail and the data, we need to remember that none of this would be possible without the city, and commercial space sector.

In so many ways, the dynamic stuff rapidly coming out of the private sector space industry is defining all of modern life, including in areas of modern defense and national security. Frankly, without the innovation of commercial space businesses, the public would not have what we have now – from the highly defined imagery and video that gives us an instant look at what’s happening to communications between combat units at the tactical level, to live war reporting from correspondents on the ground to the precision delivery of ordnance. That all depends on space and what the visionaries, scientists, engineers, and problem-solvers in America’s space tech community are continually devising and building out.

Moreover, what eventually materializes in tangible forms – like a high-resolution photograph showing a tank maneuver in minute detail – is due to an entire system of platforms, all coming together to generate these revolutionary products. In truth, it’s really a system of systems. Next-generation cameras are internalized on smaller, cheaper satellites, and transported to space on lower-cost launch vehicles. Once in orbit, they’re linked to ensure better continuity of data collection – which is then transmitted to end-users on Earth, who can access that information on a hand-held device. This entire ecosystem of technology in civil space has been completely revolutionized because of what the private sector has done over the past couple of decades to design and develop these quantum leap capabilities.

All of this may seem second nature to most people – taken for granted, in fact – but what has been accomplished is nothing short of amazing. It is a true technological and scientific revolution. And in looking ahead, we can only expect more of the same – more thresholds crossed and barriers broken, more streamlining and downsizing, and greater efficiencies achieved. But we can expect challenges as well. This is particularly on the defense acquisition side, where the U.S. government will need to continually adjust, flex and innovate – and accept some risk – to more rapidly assess, decide upon, and procure commercial space technologies for defense use. There really is no other choice. And as difficult as it is to move away from conventional processes of government requirements generation, technology evaluation and contracting, the simple fact is that things are moving so fast now that we risk falling behind if the government can’t take advantage of what the private sector offers in terms of dynamism and speed to fight.

Fortunately, leaders of the joint force – including U.S. Space Force Commander General Raymond – have increasingly recognized the value of the commercial space industry and the importance of leveraging it towards enhanced defense. Additionally, the services have also been making greater use of more novel acquisition models – at least in some areas – where faster processes allow for quicker procurement of compelling or necessary technology for defense. As the pace of technology accelerates and as our peer competitors continue to move forward with stunning alacrity in defense research and development, we’ll need to adopt more of these fast-turn, streamlined processes – not less. Continual engagement with industry – to connect the dots between defense needs and what the space economy can provide – will be vital moving forward. We have the answers and the solutions…and if we don’t, we have the thinking and innovating capacity to get them.

Russia’s illegal and unprovoked war against Ukraine has been a paradigm-shifting conflict in more ways than one. It reinforces concerns about globalization. It is challenging geopolitical assumptions. It is forcing global change in energy and trade. And it shows the real-time power and capability of space-dependent technology on a modern battlefield – especially in the areas of imagery collection and dissemination, command and control, communications, situational awareness, and tactical maneuver.

As we begin the U.S. budget process for the upcoming Fiscal Year 2023, there is an expectation for increased spending on defense in the wake of Russia’s attack on Ukraine. And while more money will help acquire needed capability, let’s work to ensure that coordination between decision-makers in DC and the commercial industry can be used to maximize the return on that capability for the dollar spent. Harnessing the creativity and drive of the commercial space industry will be critical to strengthening the key role of space technology on the modern battlefield.