KIEV: Over the next few years, a trio of European nations will make major decisions on their future fighter aircraft, meaning a potential impact on the long-term American/European fighter market — and whether European manufacturers can rack up wins against the nearly undefeated F-35 — looms.

As always, the usual considerations — how much capability can be acquired at what price, what is the long-term cost of ownership, which of the manufacturers can offer the most workshare and domestic politics — will come into play. But the three nations in question all have unique attributes that could pose challenges to the US fifth-gen fighter.

The Czech Republic may view the F-35 as simply too expensive given its relatively limited budgets. Finland, which is expected to make a selection before the end of the year, has close political ties to neighboring Sweden and its Saab offering, and may view that as an option less likely to anger Russia. And Switzerland, which already selected the F-35 in June, faces an internal push to go back on that decision and pick something cheaper.

If the stealthy American jet comes out on top in these procurements, then it will solidify a stranglehold as the leading Western-made fighter. If not, then the European offerings and the F-35’s rival product from Boeing, the F/A18E/F Super Hornet, may be able to steal a win away from what has, to this point, been a juggernaut.

The Czech government is seeking a new fleet of aircraft for when their current lease of 12 JAS-39C and two JAS-39D Gripens expires in 2027, although there is a two-year extension option on that deal. The two main bidders are the incumbent, Saab, which are offering Prague 24 of either its JAS-39C/D or the new-generation E/F models, and Lockheed, which is offering a high and low price point: the same F-16V Block 70/72 jets already procured by neighboring Slovakia and Bulgaria, or the F-35A conventional model.

Due to production rates and other factors, the two packages are priced close to one another, with the company offering 18 of either the F-16s or F-35s. Lockheed pins the F-35 at $78.9 million per jet. While a competitive price (and roughly US $11 million less per unit than the price agreed to on the Polish F-35 procurement), an F-35 pick over the Gripen means the Czechs would buy capability over capacity while also absorbing the costs of switching suppliers from Sweden to the US.

A considerable complication, according to more than one analyst, is switching from Swedish to US infrastructure. One former Czech air force officer experienced in working with the Gripen noted that “the price of changing out numerous security protocols and the integration of a new system for secure datalinks would prove to be prohibitive.”

The American-made jets do have one thing in their favor: a recent political downturn in relations between the Czech Republic and Russia. In April, the Czech government announced that two Russian intelligence officers from the FSB were suspects in an explosion at an arms storage facility in the Czech village of Vrbětice in 2014. Two Czech nationals were killed in the blast, which destroyed ammunition that was supposed to be shipped to Ukraine. (In a strange coincidence, the two FSB agents wanted for this sabotage were also the pair of suspects identified as being responsible for the high-profile March 2018 assassination attempt against Sergei Skripal in England.)

A tit-for-tat set of expulsions of diplomats between the two nations resulted in the number of Russian personnel stationed in Czech Republic reduced by more than 80 persons. Prague also officially charged Russia as being responsible for the explosion and barred a Russian consortium led by Rosatom from participating in a tender for the Czech Dukovany nuclear power station.

The sum total of these incidents has heightened the sense in Prague that Russia is less than a friendly regional power. An Atlantic Council assessment called the incident “an opportunity for Prague to not only decontaminate and reassess its relations with Moscow, but also issue a wake-up call to countries that still tend to overlook Russia’s malign behavior in their own backyards.”  Potentially, this could push the Czechs towards a closer relationship with Russia’s most powerful rival, the US — and to pick an American-made fighter.

But the competition that may have the most far-reaching implications is Finland’s HX fighter tender, scheduled to be announced by the end of 2021. The 64 aircraft buy is also one of the largest acquisitions of its kind in all of Europe — eclipsed only by upcoming decisions to be made by Canada and India.

Finland is officially neutral and not a NATO member, although it maintains close relations with the alliance. Its air force currently operates a fleet of 55 F/A-18C and 7 F/A-18D jets, making Boeing the incumbent; the Chicago-based firm is offering a combination package of F/A-18E/F and EA-18G models. However, the US Defense Security Cooperation Agency (DSCA) offer for Finland actually priced the two Boeing aircraft as several million dollars per unit higher than the F-35, likely rendering their chances moot. That leaves the F-35 up against the European powers: the Dassault Rafale from France, the Eurofighter, and perhaps most notably, the Saab Gripen from neighboring Sweden. 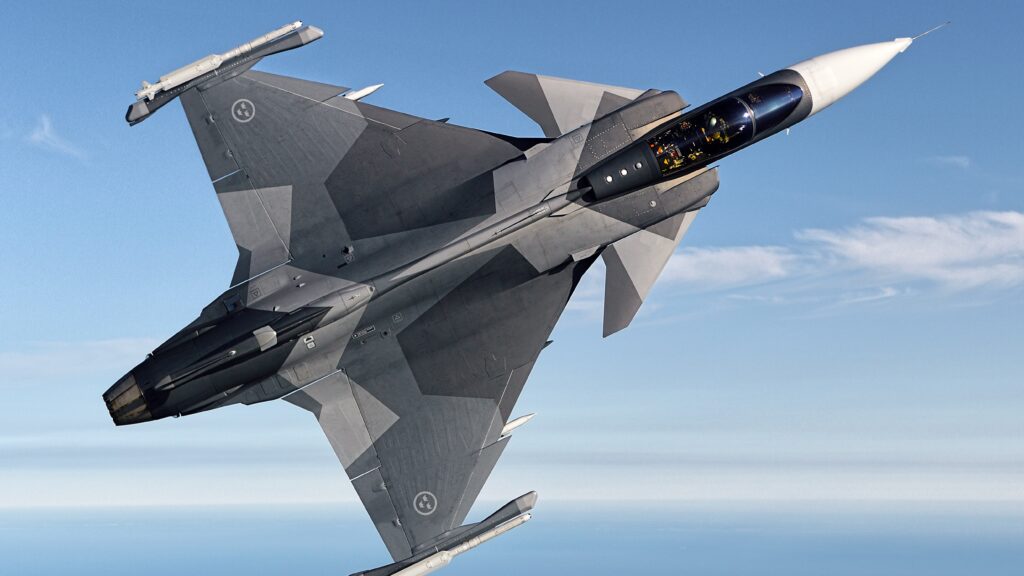 Saab’s Gripen E is central to their offering for Finland’s Air Force. (Saab)

Finland has a long border, and an even longer and unhappy history, with Russia. So whatever aircraft Finland acquires must be effective against both Russian air defenses and Moscow’s latest fighter aircraft, which makes survivability the number one concern. In that regard, both Lockheed and Saab likely think they have an edge due to the F-35’s stealth and the Gripen’s ability to conduct dispersed operations from highway airstrips, which company officials note means the plane frees Finland up from relying on air bases likely to be early targets in any Russian conflict.

Saab is trying to stack the deck as well, but noting that the electronic warfare system in the Gripen-E is not the focus of Russian counter-EW technologies, as Moscow has instead been pouring R&D into countering American systems. They are also offering a package that includes not just 64 Gripen-Es, but a pair of GlobalEye airborne surveillance platforms.

Unsurprisingly, given the almost $12 billion price tag for the competition, political maneuvering is happening behind the scenes. On Oct. 30, the Finnish paper Helsingin Sanomat ran an extensive analysis of the HX program, calling out the need for a thorough cost evaluation for whichever aircraft is selected. European analysts looking at the competition point out this could be a response to a report from the Pentagon-funded RAND Corporation, released in early October. That document emphasized the need for closer US-Finland ties, which is being interpreted as a sign there is high-level US government pressure being exerted on Helsinki to select the F-35 over other options.

Will the Swiss Save Some Cheddar?

Politics are playing out more openly in Switzerland, which is a unique case, as it made its official selection of the F-35 over the summer. The small, neutral nation is one of the wealthiest per-capita states in Europe, but the decision to select the US jet has nonetheless been met by denunciations that the aircraft is overkill for Switzerland’s requirements.

The F-35 was selected from a field of competitors that included Eurofighter, the Dassault Rafale and the current supplier for the Swiss Air Force, Boeing, which bid the F/A-18E/F Super Hornet. But some Swiss lawmakers, even among those who believe in the need for a modern air force, have pledged to support a referendum that would reverse the F-35 selection.

The anti-F-35 coalition is mixed. Some are lawmakers who believe the cost is too high — an unnecessary “Ferrari” option, as one Swiss MP described it — while others have raised concerns about whether the Swiss government’s pricing analysis of the F-35 was correct or downplayed costs.

There is also a strong pro-European factor. Most of the French-speaking cantons in Switzerland predictably favored the Rafale. As Priska Seiler Graf, a Swiss MP who also expressed concerns about the cost, has stated, “We should seek a European solution… . [W]e don’t want to be dependent on the United States.”

Finally, there are anti-war groups like Group for Switzerland Without an Army (GSoA), which wants no investment in a new jet at all and is leading the ground game against it. 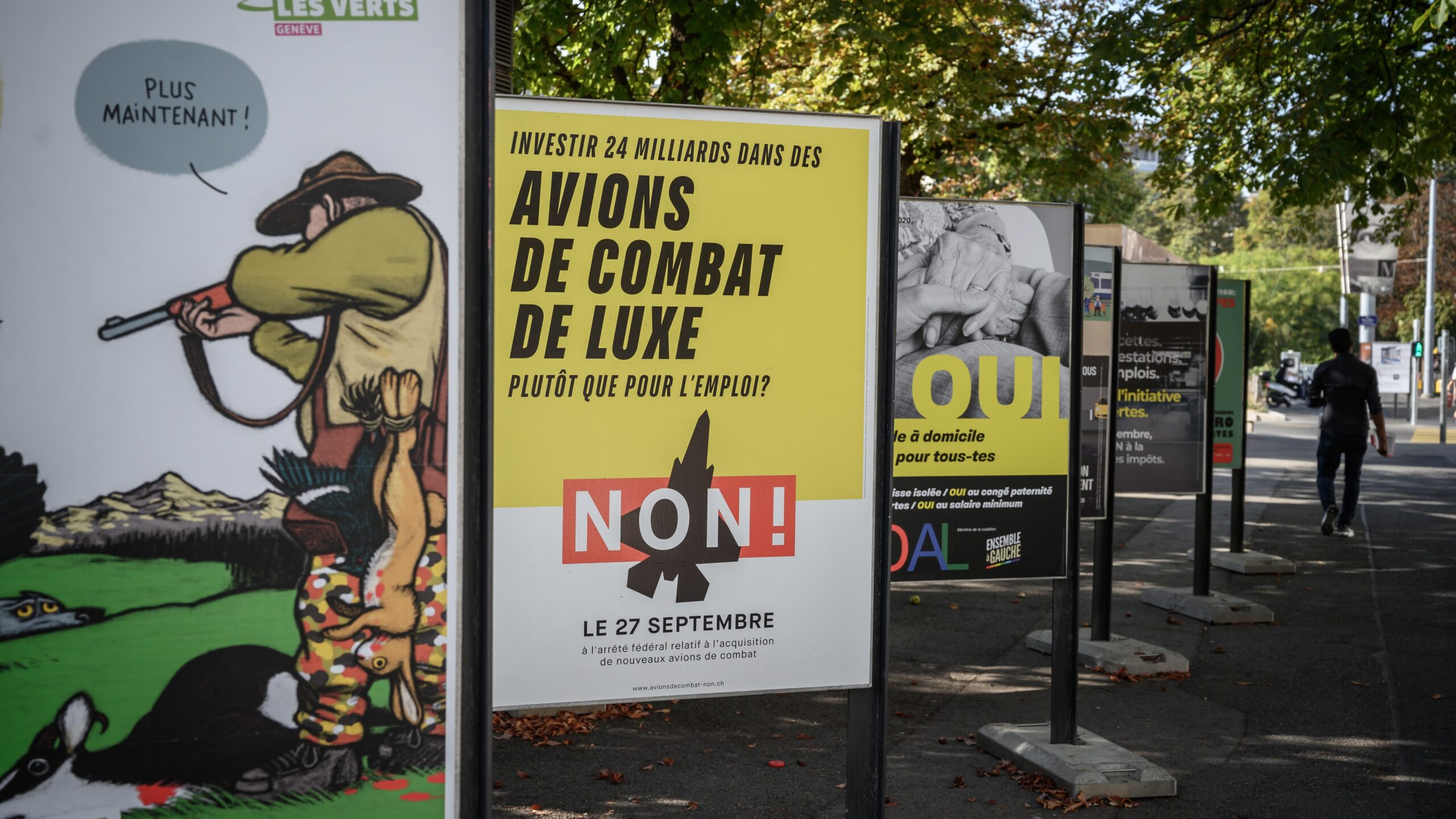 Campaigns against the F-35 selection are now underway in Switzerland. (FABRICE COFFRINI/AFP via Getty Images)

That coalition seems headed towards gathering the 100,000 signatures needed to initiate a new vote on the plane. (GSoA said last month that they will hit their threshold of required signatures by early next year if not this year, having already collected 25,000 signatures by the end of September.) If that happens, it would trigger a new nationwide vote on whether to move ahead with the fighter procurement.

How it is worded will be very important. If the vote is to continue with any fighter procurement, then it may pass with a thin margin. If the vote is specifically to move forward with the F-35, opponents believe it may well be enough to scuttle the deal.

Multiple analysts, including those with ties to the air defense industry, privately say that the movement against the F-35 will most likely garner the 100,000 signatures required to call a referendum. But overturning the selection is more difficult for the “Stop The F-35” initiative, as Swiss law requires a “double majority.” Meaning that a majority of voters, as well as a majority of cantons, must vote to overturn the sale — an eventuality that was originally rated as being unlikely to come to pass.

In September this Swiss national newspaper, Tages Anzeiger, ran an assessment of the program’s chances and stated that prior to the F-35 selection announcement, the Swiss public’s approval for proceeding with any  fighter procurement was a razor-thin 50.1%. That figure might have been well below the 50%margin, the paper said, if earlier it had been revealed that the F-35 would be the aircraft selected in the final round.

The paper also echoed other opposition voices against the sale, with the headline charging that if the Swiss Air Force ends up flying the F-35, “the CIA is always in the cockpit” and that the actions of the aircraft and its pilots would always be under US government surveillance.

Asked for comment, a Lockheed spokesman said the company is “honored to be selected by Switzerland and look forward to partnering with the Swiss government, public, air force and industry to deliver and sustain the F-35 aircraft. With the selection, Switzerland will become the latest nation to join the F-35 program, joining several European nations in further strengthening global airpower and security.”

Australia to buy new M1A2 tanks and combat vehicles for $3.5b from US